Riders are rarely thrown off the Tour de France but it happened in 1991 when Swiss rider Urs Zimmermann was kicked out of the race.

It was said that Zimmermann who finished in third place in the 1986 Tour had a fear of flying, hence his refusal to use the airplane. The Motorola rider however said that he just wanted a break from the other riders and needed some space.

The following morning at the start of the stage from Pau to Jaca in Spain, the riders decided to protest. It was not just Zimmermann’s expulsion they were protesting though, but also the compulsory wearing of helmets that had been introduced that year.

When the flag was dropped for the stage start, the riders didn’t move. After over half an hour of protest, the police chief of Pau told the race officials that he would have to reopen the streets.

The Swiss rider was originally on his way to the airport to fly back home (and proving his lack of fear of flying) when he heard about the protest. The team car turned around and went to the stage start instead. Zimmermann changed into his race clothes as the race officials relented and he was allowed back in.

However, his team manager Jim Ochowicz was thrown out at the end of the stage instead.

Zimmermann went on to finish that year’s Tour in 116th position, 2h 13′ 58″ behind the winner Miguel Indurain. He retired at the end of the 1992 season after nine years in the professional peloton. 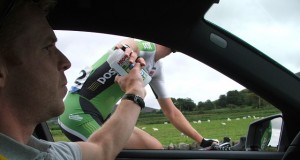 A day in the Tour of Britain cavalcade with An Post-Chain...