Matthew Teggart is lining up in his second An Post Rás this year, and the Irish rider will be providing an insight to the race in a diary which we will be publishing every day.

The 21 year-old made his debut in the eight-day race last year where he rode for the Irish National Team. He finished in 35th place overall, took a number of top-20 placings along the way and also finished in 13th place in the U23 category.

Since then, he has been signed by the An Post Chain Reaction team where he has taken a number of top-20 placings, including 9th on a stage of the Tour de Normandie (2.2) and 15th on a stage of Le Triptyque des Monts et Chateaux (2.2).

We’re satisfied with how today’s stage went. We tried to make sure we had somebody in all the moves and with Kasper (Przemysław Kasperkiewicz) slipping up the road and being joined by a few others, we were happy with that.

Yesterday was a bit of a disaster. Kasper and I missed our flight from Barcelona where we had been taking part in a training camp and we didn’t arrive at the hotel in Dublin until 12.30 last night. Kasper still had to get his bike assembled and his SRM fitted so our mechanic only managed that this morning.

At Barcelona Airport yesterday, we’d to decide who was going to man up and tell Kurt (Bogaerts – Team Manager) that we had missed our flight. I took one for the team and made the call. Luckily for us though, Kurt has lost his voice so he wasn’t able to shout at us!

Despite arriving late, I still managed a good night’s sleep although for some reason, I got a cramp in my leg during the night.

It was a good buzz at the start, seeing family and friends. My father works on the race, so it was good seeing him as I haven’t been home since Christmas.

I was unsure how today’s race would go as I haven’t raced in a month, since breaking my elbow at U23 Liege-Bastogne-Liege. It was only a hairline fracture though. Although I’ve done a big block of training, it’s not the same as racing. I just planned on not getting involved in any attacks for the first half hour of the race.

I thought with 40 kilometres to go today, that it was game over regarding GC as the break had a big lead and nobody seemed to be bringing them back. With just five-man teams in the Rás, it’s always hard to organise chases. We would have been happy with that as Kasper would have had a great chance at the GC. But with the lead group’s gap being brought back to just 16 seconds at the finish, it’s all to play for.

It was a bit dodgy in the last ten kilometres but it takes a few stages for the Rás to settle down. Overall, we’re happy. I think there were a good few crashes but all our lads managed to emerge unscathed. 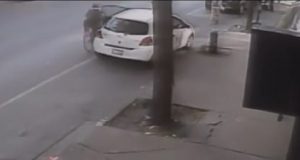