Milan-San Remo is currently taking place and you can see live data on the Velon website from a number of riders taking part in the 291-kilometre race.

Twelve riders are carrying Velon tracking devices from northern Italy down to and along the Mediterranean coastline and data – speed, acceleration, heart rate and power – is being shown in real-time on the Velon website and the Velon app for iOS and Android as well as during the television broadcast. The Milano-San Remo data capture is part of the newly inked deal with RCS.

“Having Velon onboard at any race is awesome for the spectators,” said Skujins. “Just having that extra amount of info on what’s going on in the bunch makes watching on the telly a bit more exciting. The tracker is such a small thing to carry, but it provides a lot more excitement for my supporters, who can see in real time how hard I’m working and what it takes to be in the race.”

You can see the real-time data here. 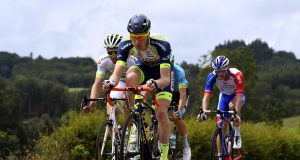