Vincenzo Nibali will return to action this Tuesday at the Giro di Toscana, marking his first race since crashing at the Vuelta a Espana. Two days later, his Bahrain Merida team will line up at the 65th edition of the Coppa Sabatini

“I’m back to races after the second place at Vuelta,” said Nibali, “and I’m still recovering after the crash but I can say that my the condition is improving. I’m happy to go back to Tuscany because I have a lot of fans and also is my second bicycle home”.

His team mate Sonny Colbrelli will be trying to win Coppa Sabatini for the third time after his successes in 2014 and last year’s edition.

“On Sunday I ran well but I missed the final, I’m in a very good shape and I would like to win another Italian race after Coppa Bernocchi few days ago,” said Colbrelli.

“We have a very competitive team,” said Directeur Sportif Alberto Volpi, “who can really do well in both races. Vincenzo will be our captain at the Toscana, with Sonny who will be able to win the first stage. For the Coppa Sabatini, however, the leader will always be Sonny with Giovanni and Enrico as outsiders”. 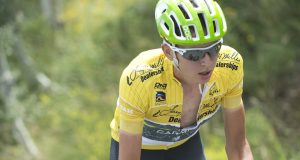