The 113th edition of Il Lombardia takes place this Saturday and the Bahrain Merida team will go into the race with two protected riders – Vincenzo Nibali and Dylan Teuns.

The last Monument of the season starts in Bergamo and covers 243 kilometres before finishing in Como with a total elevation gain of nearly 4,000 meters. The iconic climbs of Madonna del Ghisallo and Muro di Sormano are included, with the Civiglio (4.2 kilometres climb at 9.8%) and San Fermo della Battaglia (2.7km at 7,2%) both inside the final 20 kilometres.

In the last edition, Vincenzo Nibali, following on from his victories in 2015 and 2017, came second behind the French rider Thibaut Pinot and this year he will be among the favourites of the race.

“I expect the usual tough and extremely selective race,” explained Bahrain Merida Directeur Sportif Alberto Volpi, and Vincenzo has shown he has a growing condition and will be one of our leaders. Dylan Teuns will be the other one also why he already showed that he had a good feeling with the Lombardy roads”.

Last year, Teuns finished 3rd on Como’s lake front. “Being on the podium of this beautiful race, said Teuns, has me only dreaming more. Last Tuesday at the Tre Valli Varesine, I had some good sensations and so I’m looking forward to be in the front tomorrow. I really would like to close my season with a very good result”. 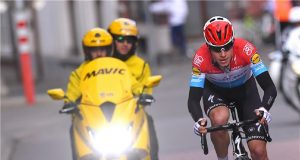 Bob Jungels to focus on the Tour de France in 2018