Following on from his bronze medal ride at the Elite Men’s Time-Trial at the World Championship on Wednesday, Victor Campenaerts travelled to the Swiss town Grenchen to undertake tests for attacking the World Hour Record.

On Friday, the European time trial champion did some specific training sessions and mostly concentrated on getting used to the track. Yesterday, Campenaerts did a test in which the purpose was clear: riding as many kilometres as possible during 30 minutes, just above the actual hour record pace.

The current hour record is set by Bradley Wiggins, who managed to cover 54.526 kilometres in one hour. Campenaerts is satisfied about how the test turned out, but remains cautious.

Victor Campenaerts: “In my opinion, the test went well. During half an hour, I managed to maintain an average speed of 54.8 kilometres an hour. Of course, I realize that 30 minutes at such a pace is a big difference to maintaining it for the entire hour.

“There will still be a lot of work to actually break the hour record. Before this test, two different scenarios were possible. On the one hand, the test could be disappointing and the project would be postponed, most likely until after the Olympic Games of 2020 in Tokyo. On the other hand, the result of the test could be positive and I would, together with the team, evaluate if planning an attack on the hour record would be possible in the short run.

“However, this doesn’t mean within weeks, or even months, more than likely in the course of 2019. So, the fact that the test went well, doesn’t necessarily mean that there will be an immediate attempt to break the record. But of course, it’s a promising sign.”

“At the moment, I’m in an excellent shape thanks to my participation in the Vuelta and my built-up to the World Championships. There hasn’t been any specific preparation for this test. So, there’s still a margin for improvement, in terms of training as well as location. So let’s not be too confident and let’s certainly not jump to conclusions. It was simply a good sign that the simulation went well. We will, within the team and at an appropriate time, evaluate when a possible attack on the hour record will be possible.” 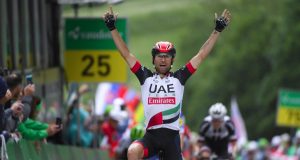