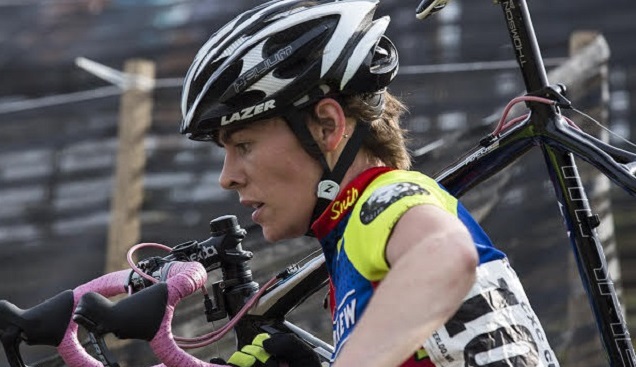 Ireland’s top elite men, elite women, masters, U23 men, and juniors will gather in Swords, North Dublin, next weekend to compete for their respective Irish Cyclocross titles. While the favourites are expected to dominate the events, there are lesser known riders in each group equally capable of climbing the podium steps.

Mayo native Maria Larkin is one of them. And after travelling from Chicago to take part in the championships, she is likely to give her Women Elite competition a good run for their money.

We caught up with Maria as she’s about to step on the plane home.

“I grew up in Balla, Co. Mayo, and moved to Dublin for college,” she said.

“I went to D.I.T Bolton Street to study Architecture. There weren’t many jobs available when I finished college, so I had to look further afield to find something. I got an internship at a firm in Chicago during one summer, and they were kind enough to keep a desk for me when I graduated. That’s when I started commuting properly. Chicago is very flat, so it’s really easy to cycle to work, although the winters are pretty extreme.”

The 27 year old architect started racing on the track five years ago, in Chicago. After watching her friends race cyclocross, she decided to give it a go, just to see what it was all about. She was hooked.

“I did my first race (which was a kind of a relay race) with my boyfriend, and I literally couldn’t believe that people loved it so much, my lungs burned, it hurt so much! I came back the next year and gave it another go. I was beginning to get hooked. I loved the challenge of the intensity and bike handling.”

She is no stranger to tough opposition. The Illinois cyclocross scene is getting increasingly popular and unlike Ireland, women get to race among fields of over thirty per competing category.

“Typically we have around 30 women in the local Elite field and 40 or more beginners. Our local series is the Chicago Cyclocross Cup (Chicrosscup). We are very lucky as the series is 11 races long and we get the same payout as the elite men, as well as our own time slot. That attracts a lot of really good people such as the Schneider sisters (Pro Team Tibco) who regularly come down to race from Wisconsin. It’s really incredible to line up with such talented women. There are also a couple of regional UCI level races, which have a strong 2/3 field , and obviously the Elite level women. I plan on racing the UCI elite field as much as I can next season, which will mean lining up behind women like Katie Compton, Meredith Miller and Caroline Mani.”

Racing at home for the first time, Maria isn’t making the trip back to Ireland for a walk in the park. She is here to compete and make a name for herself. She has the results to back her strength: she finished ninth out of thirty seven in the recent 2014 Illinois State Cyclocross Championships.

“I’m really excited to race at home, plus I hope that a few of my friends from home and family can come out and cheer me on. My parents have never seen me race, so that’ll be really special.”

“My fitness has improved a lot this year. I started out as a Cat 3 at the beginning of this season, and had a few really good results and decided it was time to upgrade. As I was planning on coming home to visit my family around Christmas anyway, I thought, why not challenge myself against the home crowd. I’ve been in contact with Natalie Grieve, who’s told me so much about the racing scene at home. It seems like the sport is really growing a lot, she’s really gotten me super excited to race.”

“It’s a bit harder to scope out who’s who in Ireland. I know that Fran Meehan is one of the best. 5 times champion, and so many impressive results on the track and road. Claire Oakley is also another person who I know will be really tough competition, she’s been dominating the Ulster CX races. I’ve been following Ulster CX, the Off Road Commission and Cycling Ireland on twitter, it’s really nice to know what’s happening in Ireland and seeing the enthusiasm grow and grow.”

“I think the course is going to be challenging. We have a good range of course types here, but a lot of the time it’s hard to find a lot of elevation in Chicago (it’s flat as a pancake), so a lot of elevation changes as well as a more than likely muddy course should be tough for me. I’m really hoping it’ll be warm, as the weather here gets extremely cold during the winter, last year we were lining up for races when it was -10C.”

We’ve all seen videos of cyclocross races in the USA. According to Larkin, it is indeed as fun as it looks.

“The racing scene here is fantastic. Loads of people turn out, we can have as many as 800 people racing throughout the day. People stick around after their races and cheer for the next race. It feels like a large cyclocross family, and everyone is mad about the sport. Beer hand ups are really only the start of it, there’s rasher hand ups, dollar bills, $20 if you’re really lucky, sweets, cupcakes, whiskey shots, champagne flutes!”

“A lot of the race promoters here are making the effort to give equal payouts and opportunities to women. Having our own race this year at the Chicrosscup (www.chicrosscup.com) has been really amazing, it’s a totally different race when you’re not fighting to pass masters or juniors, it really gives the women a chance to shine. We have had some really close battles this year, and people really get to see what we can do.”

As for Maria’s moment of Svenness?

“I somehow managed to stay on my bike at the Midwest Regionals in Grand Rapids. I was bombing a really scary, muddy downhill. The mud made sure my brakes weren’t working at all. I did a kick-push to keep balance at high speed, and was almost all the way off my bike to one side, my leg up in the air, sliding sideways! But somehow managed to stay upright. I heard the girl behind me yelp, she thought I was going to crash for sure. That course was a good prep for home I think, foggy misty Irish type of day. Complete mud fest.”

We wish Maria best of luck next weekend. 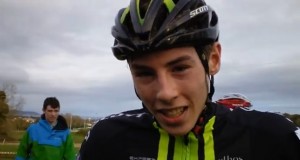 David Conroy talks about his form ahead of the Irish National...