The Union Cycliste Internationale (UCI) today announced the revised 2020 calendars for the UCI WorldTour and UCI Women’s WorldTour, with a view to the resumption of the cycling season, halted due to the coronavirus (Covid-19) pandemic.

The new calendars have been approved by the UCI Management Committee and, today, by the stakeholders of men’s professional road cycling through the Professional Cycling Council (PCC), which manages the UCI WorldTour calendar. However these dates, crucial for stakeholders, naturally remain subject to the lifting, until the end of the season, of the restrictions relating to the organisation of events put in place by the authorities in the various countries. The UCI have acknowledged that they may need to adjust the calendar to take into account the development of the pandemic.

In agreement with stakeholders including organisers, teams and riders, the UCI has established a revised 2020 UCI WorldTour which will start with Strade Bianche on 1st August and finish with the Vuelta Ciclista a España on 8 November. The series will include 25 events, after the five events held at the beginning of the season – Santos Tour Down Under (Australia), Cadel Evans Great Ocean Road Race (Australia), UAE Tour (United Arab Emirates), Omloop Het Nieuwsblad Elite (Belgium) and Paris-Nice (France) -, and the cancellation of six events at the request of their organisers due to the effects of the pandemic – E3 BinckBank Classic (Belgium), Tour de Romandie (Switzerland), Tour de Suisse (Switzerland), Volta Ciclista a Catalunya (Spain), Itzulia Basque Country (Spain) and Donostia San Sebastian Klasikoa (Spain).

The Cadel Evans Great Ocean Road Race – Elite Women’s Race (Australia) is the only event of the 2020 UCI Women’s WorldTour that was able to take place before the coronavirus spread worldwide and brought the cycling season to a stop. The health crisis has taken a heavy toll on this major series for women’s professional road cycling with three events cancelled – Women’s WorldTour Ronde van Drenthe (the Netherlands), Trofeo Alfredo Binda – Comune di Cittiglio (Italy) and OVO Energy Women’s Tour (Great Britain). The revised UCI Women’s WorldTour calendar will start on 1st August with the Strade Bianche and finish on 8 November with the Ceratizit Madrid Challenge by La Vuelta (Spain). The 2020 series will include 18 events: 13 one-day races and five stage races. 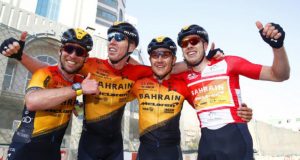