“Today we had our goal set on a bunch sprint,” team director Hendrik Redant said. “As Travis McCabe did very well in the prologue yesterday, he showed us he had the legs for the sprint today.”

McCabe said the final kilometres were chaotic since there were no real sprinters teams at the race.

“I had the team and the boys to keep me safe and out of trouble for the last few laps,” McCabe said. “Seba Haedo and Gavin Mannion kept me in the top 10 with one lap to go and Sergei Tvetcov attacked and went with the flyer and he almost held it to the line. That forced other teams to chase and allowed me to sit and about a third wheel.

“At 250 metres, I opened up the sprint, got a bike length almost immediately and held it to the line. I’m extremely happy to win today and so proud of everyone on the team, both riders and staff. It takes a village and today it showed.”

A hot and challenging 168.3 kilometres of racing awaited the riders for stage, with most teams looking to be a part of the break of the day. The four leaders fell apart on the last climb, and with 15 km to go it came all together. Serghei Tvetcov tried a move with about 3 kilometres to go, which was forced other teams to chase.

“None of our guys were in any trouble during the race, so we could aim for the sprint,” Redant said. “Travis was beautiful placed and started his sprint with 240 metres to go. Immediately he got two bike lengths and he kept that till the line. A great win.” 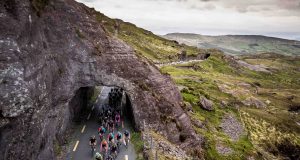