Team Sunweb’s Tom Dumoulin successfully defended his overall lead with a strong third place on the final stage of the BinckBank Tour, having received solid support from his teammates throughout the race.

After moving into the overall race lead on the penultimate stage, Dumoulin still had a tough job ahead of him on the final stage with just four seconds separating him and Tim Wellens (Lotto-Soudal) in second place.

After a big effort from his team to set Dumoulin up for the finale, he stepped up and showed the strength needed to make sure he was in control, racing to third on the tough finishing circuit in Geraardsbergen. Jasper Stuyven (Trek-Segafredo) took the win, 1″ ahead of Philippe Gilbert (Quick Step Floors) and Dumoulin.

Wellens finished a further 8″ behind meaning Dumoulin’s winning margin over the Belgian increased to 17″.

After the race Dumoulin said: “It’s great to finally win here after a few years of being close. This was our goal and we all had to come together to make it happen, which we did. The team was super strong every day and today it was up to us but we had it all under control, and I had good legs today.” 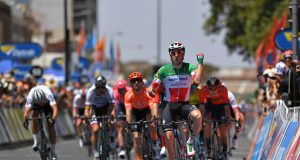 Elia Viviani looking for stage wins at the UAE Tour