Former World Champion and multiple Monument winner Tom Boonen will stay with Etixx-Quick Step for next season after signing a new contract with the Belgian team.

The 35 year-old Belgian signed with the team back in 2003 and since then has gone on to win the Tour of Flanders three times and Paris-Roubaix four times.

In addition to his Monument wins, he’s also won Kuurne-Brussels-Kuurne, E3 Harelbeke and Gent-Wevelgem, all on multiple occasions, six stages and the points classification at the Tour de France, as well as the coveted rainbow jersey.

Next season, he will once again have an opportunity to become the outright record-holder for the number of Flanders and Roubaix wins and by extending with Etixx-Quick Step, Boonen will have one of the strongest cobbled squads to help him in his bid.

“I’m very happy and delighted what we came to an agreement. It’s important for me to stay in this team, as I’ve basically spent my entire career here and enjoyed many beautiful moments, reaching some big goals”, said Boonen, one of the few riders in the current peloton to win more than 100 races as pro.

“I know everybody since the inception of the team and I consider this squad as my second family. To be quite frankly, I don’t see myself with another jersey. It will be great to embark again with this strong team on a new adventure in the one-day cobbled races.”

“We are very happy to have Tom on board also for next season,” said Patrick Lefevere, Etixx – Quick-Step’s CEO. “It’s the logical way. We have a strong connection with Tom, which goes back to 2003, when our team was established.”

“By staying with us, Tom can count on a strong team which will support him in next season’s Northern Classics campaign and in his assault for a fifth Paris-Roubaix.” 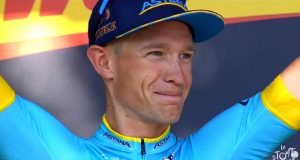