Tiesj Benoot will not start today’s fifth stage of the Tour de France, his Lotto Soudal team has confirmed this morning.

The Belgian rider along with team-mate Tomasz Marczynski crashed with five kilometres to go on yesterday’s fourth stage. Benoot incurred a second degree dislocation of the AC joint in his right shoulder, a bruise of the ribs, the right shoulder blade and left wrist. In addition, he has abrasions on his hips, back, arms and legs and cuts to his right eyebrow and the back of his head, which required stitches.

Benoot, who finished 14th overall at last month’s Critérium du Dauphiné, had been sitting in 53rd place overall and fifth in the youth classification prior to yesterday’s stage.

Marczynski who is making his debut in the race hit his handlebars with his left knee, resulting in a bruised knee. 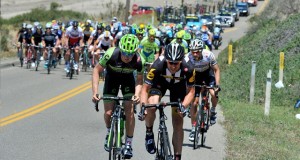 Matt Brammeier takes victory on the final stage of the Ster...