Thomas de Gendt (Lotto-Soudal) has visited Mont Ventoux where he gave a helping hand to the restoration work that has been taking place on the memorial to Tom Simpson on the climb.

De Gendt is the most recent winner of a stage of the Tour de France on Mont Ventoux having won stage 12 of this year’s race.

Work has been done to repair the memorial to Simpson in advance of the fiftieth anniversary of his death on the climb during the 1967 Tour. Amongst those helping to restore the memorial are Simpson’s daughter Joanne.

Simpson collapsed and died during the thirteenth stage of the race from Marseille to Carpentras. He was 29 years-old. The post-mortem examination found that he had mixed amphetamines and alcohol and the official cause of death was “heart failure caused by exhaustion.”

The granite memorial stands on the spot where he collapsed and died, one kilometre east of the summit. Cycling Weekly magazine began a fund for a monument a week after Simpson’s death, raising about £1,500.

The memorial was unveiled in 1968 and it has since become a site of pilgrimage for cyclists, who frequently leave cycling-related objects, such as water bottles and caps.

Sporza have posted a video of De Gendt’s ride to the memorial. 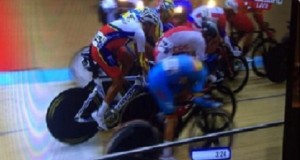