This year’s Tour de France was the most successful yet for the Cannondale-Drapac team which saw them win a stage through Rigoberto Uran who also finished second overall.

In addition, there were numerous other highlights for the American team. On stage two, Taylor Phinney nearly held off the peloton in the finale. Caught in the final kilometre following five hours up the road, he came away with the polka dot jersey.

Nate Brown got in the breakaway the next day and scored enough mountain points to keep the polka dot jersey within the team. Dylan van Baarle spent several days in the first week on the escape. He earned most aggressive on stage seven, sporting the award’s distinctive red numbers on stage eight.

Uran won stage nine of the Tour de France, jumping up to fourth overall and announcing himself as a general classification contender. And suddenly the target shifted shape. Cannondale-Drapac spent the final two weeks of the Tour de France largely at the service of their leader – a leader who went on to finish second overall, the best general classification result in Slipstream Sports Tour history.

“Finishing second to Froome at less than a minute seems pretty good to me,” Uran said afterwards. “It’s a quality final podium in Paris, so this is the greatest success of my career. This result is dedicated to my family, friends, my team and everyone who has supported me during the last three weeks.”

“We knew it would be difficult to win the Tour but not impossible, so we gave it everything. It’s been a great Tour.” 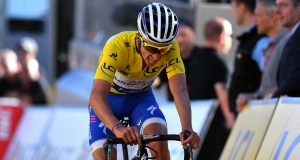