6.30am. I’m awake before my alarm. I creep out of bed, grabbing one large bidon and two bananas. No gels. I take the bike for a recovery spin around the Phoenix Park. It’s a bit misty, the deer are asleep somewhere. I only spy one or two prancing about. I meet a clubmate coming the other way, probably on her way into work.

The cold reality of the outside world is looming fast. It’s why I wanted to make the absolute most out of the last day of the Rás. From the gun I was moving up the pack. At 10km I make a dig off the front. The bunch don’t let me out of their claws though, but for a glorious few moments I am at the front of the Rás. It feels good.

I try stay in the front 40 or so, and as we pass through Prosperous I spy a chance to go again. A small move of eight of us go clear, but we’re reeled back in after a brief sojourn – a few kilometres at most. The break of the day is one of the next groups to form, and my effort to bridge comes to nought. 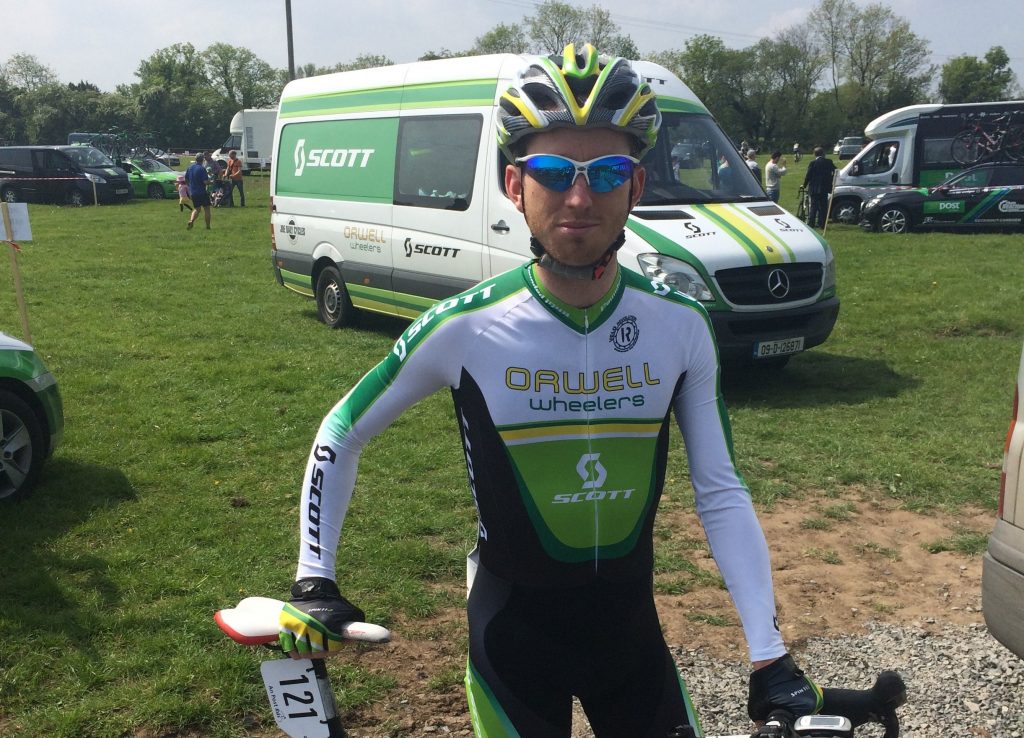 I tuck in for the day then. The weather is glorious and we’re heading for home, so spirits are high. I spot Rás legend Brian Ahern on the side of the road near Ratoath and manage to give him a thumbs up.

There’s a clash of wheels as we drop into a right-hander at one point, with someone going into the ditch on the far side of the bunch. People are desperate to make it to the final circuit, and the fight for position is as tough as ever.

We climb the Cross of the Cage and descend to Skerries. The buzz whipping through the main street is umatchable, the crowds are screaming and shouting. I hear my name here and there, a cry of ‘Go Orwell!’ It’s all fuel for the mind, the legs want to keep going.

I’m contemplating taking it handy for the laps, soak it all up and savour the moment. I have friends, family, acquaintances, clubmates, workmates – all dotted along the lap, up the climb, at the KOH. I could high-five the crowd, stop for a chat at the top of the Black Hills…

First time up the climb and I’m weaving past shattered riders. I’m at the back of the field, but there’s many more behind me. Through Skerries and up again. At the top corner I try to see Jim Shortall. He’s a former Irish National Champion, and a regular watcher at this spot. I can’t get a glimpse, but instead have to take the corner stupidly wide.

Last time through Skerries, last chance to take a back seat. On to the climb, and no! I can’t do it! The Rás deserves your best effort, your hardest attack, the most suffering you can endure. I’m off the back this time, but get on through the cars along the descent behind a strong North Down rider.

We come into the town for the final time, sprinting like crazy and then we’re done! Men of the Rás!

I claim 41st place over the line, a personal best for me, and 9th county rider. Proud of that. It’s not a lot for the big guns, but exceeded my modest ambitions for the Rás.

The guys all come over the line to cheers and celebration. There’s a carnival atmosphere in the town, and people buy me ice cream and beer (you know who you are, thanks!). We collect our finishers’ medals, and Ronan pops a bottle of champagne on the beach. After much cheers-ing and toasting, it’s time to head home. My parents are here to chauffeur me away, as my girlfriend is too busy winning the final of her camogie league.

It’s been a tough week, no doubt about it, but it’s been made a lot more tolerable by the weather and by our support squad.

I never had a single problem with my bike on the road the whole week long. It was a pleasure to be able to drop into the little ring on the many horrible climbs with complete confidence that I wasn’t going to unship my chain. Fionn Sheridan can be found in Joe Daly Cycles when he’s not building frames overnight, and I know I can always trust him with my bike.

John Busher wasn’t officially on our team when we started, but he pretty soon became invaluable. I’ve never had a shinier chain than when he’d been cleaning it, and he claims full credit for my Kerry performances with his magic bike polish!

Stephen O’Shea was always behind me with a bottle when I needed it, and quite a few times even when I didn’t! How he juggled a Rás team while rescheduling and planning the National Championships, I’ll never know, but it was great to have him at the top of the team and behind the wheel. 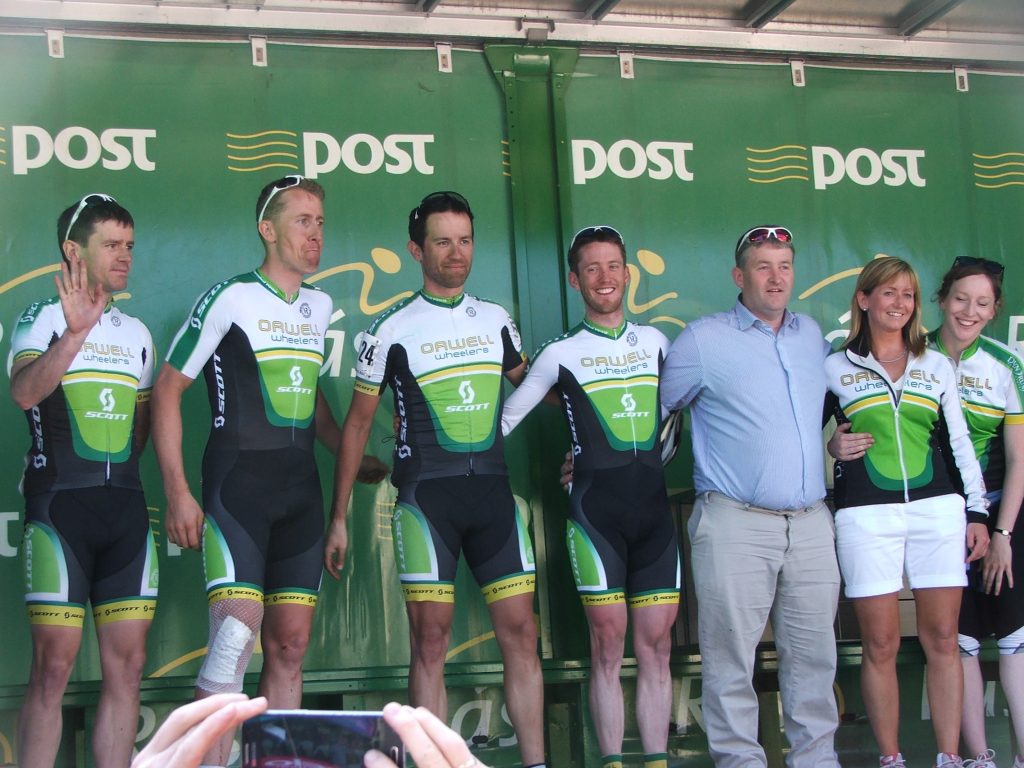 Our super soigneurs were Aishling O’Connor and Mary Brady, and I don’t know if words will do these women justice. Pro-level musette deliveries, bottle hand-ups, leg-rubs, sandwiches, shakes, bidons, luggage transfers, accommodation sorting… and that’s just what I know about!

During Saturday’s stage Mary took a bus to Cork from Dungarvan to fetch the van after it needed a service, and then drove back to Baltinglass to be ready to collect us for the stage finish. And all of this with the biggest smiles and the brightest personalities on the entire Rás!

I’ll try not to stray into Oscar territory, but a brief thank you also to all the fellow county riders who helped make the Rás a bit more pleasant and more craic along the way – grupetto buddies some days,legs of steel the next. The Rás *is* the county riders, and they make the race what it is.

It was great to finish alongside three Scott-Orwell teammates. Each of them were challenged in their own way, and stepped up to the mark to get to that finish line in Skerries. Nobody turned those pedals but themselves, and I know they’re proud of their performances, and it’s great to welcome another batch of the Men of the Rás into the club. Hopefully Stephen will be back next year to finish the job he started, and the Rás will be ready for him if he does.

Finally, thanks to everyone who sent messages of support or came out to shout or buy me ice cream. You’ll always have a special place in my heart… especially for the ice cream!

Until next year, farewell Rás! 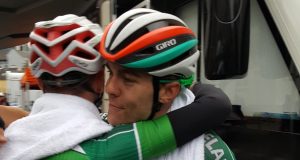 Mark Downey sprints to ninth in the Men’s U23 World Road...