The title of Lanterne Rouge, awarded to the cyclist who finishes in last place in the Tour de France, is a badge of honour identifying the rider who has arguably fought hardest to make it to Paris. It can be such an honour though that it can be fought for amongst the riders and the most memorable fight was that in the 1979 Tour.

In that year’s Tour, amongst the riders who lost big chunks of time in the mountains were Gerhard Schönbacher who rode for the DAF team and Philippe Tesnière who rode for FIAT. With four stages remaining, Schönbacher and Tesnière occupied the final two positions on GC and it looked like one of these two would be Lanterne Rouge in Paris. The Frenchman Tesnière knew the value in being the last rider, as he had finished in that position in the previous year’s Tour. In 1978, Tesnière received a lot of publicity and more importantly, he got some decent criterium contracts.

So, on the 21st stage, a 49-kilometre time trial in Dijon, both riders could be expected to lost a decent amount of time. They also wanted to ensure that they lost more time than each other to move into last. However, they ended up misjudging it.

On the final stage into Paris, Schönbacher along with a number of other riders, was dropped from the peloton. Just before he crossed the finish line on the Champs Elysées, he stopped and kissed the road.

The fight for the Lanterne Rouge had generated a lot of publicity, attention that the Tour organisers hadn’t appreciated. For the 1980 Tour, they decided that from the 14th stage onwards, the rider who sat in last place on GC would be removed from the race. Despite this rule though, Schönbacher still managed to finish last in that race.

Schönbacher would race for another ten years. He would later become a race organiser. Unfortunately, his big rival, Tesnière was diagnosed with cancer in 1987, and died six months later at the age of 32. 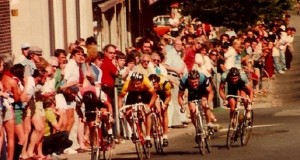 Alan McCormack and the Coors Classic – Part I