Team Sunweb has announced their team for the 2018 edition of the Tour de France, where they have previously stated that their intention this year is to gain experience riding for the GC at La Grand Boucle. In addition, the team has said that the eight-rider line-up will search for success on the difficult sprint stages.

Tour de France coach Tom Veelers said: “With the ambitions we have at the Tour we’ve selected the strongest possible configuration of qualities and riders. Losing Wilco to a re-injured shoulder will be a big loss for us in the team time trial and the mountain stages, but we have Laurens ten Dam to replace him, who’s Grand Tour experience is extremely extensive and will be very valuable.

“Whilst taking the first careful steps towards our future Tour de France GC ambitions, with the importance of learning and gaining experience this year, we’ll also go for day results on the uphill sprints.

“Primarily everyone’s responsibility is to keep Tom safe during each stage. Alongside Laurens, we have Chad, Søren, Michael and Simon as the guys to help out on the medium to difficult stages and Edward and Nikias on the flat stages. We’ve never been to the Tour de France with a GC focus and it will be a completely new experience for us and a long-term challenge that we are looking forward to.

“We want to get through that process with Tom this year without any pressure on results, creating the foundations to build on in the years to come. The parcours provide the perfect platform for an exciting race, and after achieving this year’s GC goal of a podium at the Giro, we’re very motivated to head to France and look forward to seeing what it brings this year.” 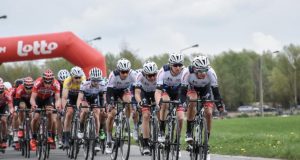