Team Sky have announced that they have extended their contract with Philip Deignan for the 2018 season. It will be the fifth year that the Irishman has race for the team.

Deignan had some solid performances this season where he worked tirelessly to help the team to overall victories at Paris-Nice, the Tour of the Alps and the Vuelta a Burgos.

On signing a new deal he told TeamSky.com: “It was a very easy decision. I’ve been part of the team now for four years, I’ve settled in nicely and I’ve made so many good friends on the team. I feel almost part of the family now, so it was an easy decision to stay.

“I like the way the team works with everything being quite scheduled out and planned. I find I work better in that environment and the team provides all of that for me with such a professional set up and coaching. We’re so well looked after on this team and I can’t take it for granted just how well we’re all looked after. It’s been a great experience for me so I’m looking forward to it continuing.”

Deignan raced the Giro in 2017 and he’s looking forward to racing the Italian Grand Tour again.

“I think my aims will be similar to this year, and just trying to be consistently good from February onwards. Being able to do the job I’m asked to do, and hopefully have a solid Giro and work towards that race again as a big objective. But mainly consistency and being able to do my job.” 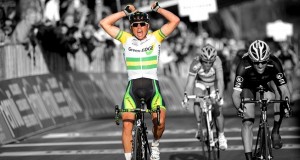