Team Novo Nordisk, the world’s first all-diabetes professional cycling team, earned a historic win on Saturday when David Lozano soloed to victory on Stage 7 at the Tour du Rwanda. This win marks the team’s second victory in its six-year history.

Beginning in Musanze, the 107-kilometre stage featured two intermediate sprints and six categorised climbs with the final one serving as a summit finish. Attacks flew from the start and Team Novo Nordisk’s Joonas Henttala made the initial break.

The group splintered on the first climb. When the raced reached Kigali, Lozano had bridged with a small group of riders to make a nine-man front group. Heading up the final climb, Lozano attacked, dropped the other escapees, and soloed to the win on the penultimate stage.

Hailing from Terrassa, Spain, Lozano was an 11-time Spanish national mountain bike and cyclocross champion. At 22 and the peak of his career, he was diagnosed with type 1 diabetes, and his team immediately broke his contract. He connected with Southerland via social media soon after his diagnosis and was invited to race with the newly forming Team Novo Nordisk.

He is currently in his sixth year with the project; career highlights include fifth overall at the Tour of Estonia (2018) and winning the king of the mountain’s classification at Cholet Pays De Loire (2014). Today’s win serves as his fifth top 5 finish at this week’s Tour du Rwanda.

David Lozano: “This win is so important for our team, myself and all the people around the world affected by diabetes. It is absolutely amazing to be here and take this win in Rwanda. This is such a special place and I’m honored to stand on the top step of the podium and proudly show our Changing Diabetes jersey.”

Phil Southerland: “For Team Novo Nordisk, the Team Type 1 Foundation, every person in Rwanda with diabetes, and the 437 million people around the world affected by this condition, this win is a win for all of us. David wanted this win so badly, and he fought hard on a tough and brutal stage. He is a champion and together we are changing diabetes in Rwanda!” 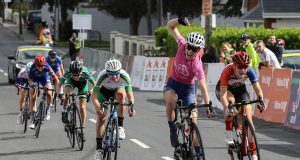