Team Giant-Alpecin have announced that 19-year-old Lennard Kämna (GER) has signed a two-year contract to ride with the WorldTour team. The young German who will be joining from Stölting Service Group, has huge potential and was crowned Junior World Time Trial Champion in 2014. Kämna is recognised as one of the biggest talents of his generation with a strong ability in the time trials.

In his career to date, Kämna has already produced some impressive results and in the junior category he was among the world’s best. 2014 was a fantastic year for him as he won the German, European and World championships titles in the time trial. Kämna won the overall classification at Grand Prix Rüebliland and was second at Trofeo Carlsberg and Tour de Istra, taking stage wins in all three races.

Kämna said: “I am glad about my contract at the German Team Giant-Alpecin. Based on the good talks that have taken place, I am looking forward to being part of this team. The professional structure and the teamwork philosophy have all been important factors in my final decision. On top of that, the contributions the team does to bring German cycling back on a high international level are very crucial.”

The signing is seen as part of the team’s objective of developing German cycling through their 2017 Development Program. The approach the team has chosen is focused on grassroots development, supporting the growth of German cycling from its basis: inspiring young people to participate in the sport, and once their careers have advanced, to offer the very best of class an opportunity to enter into the team’s Development Program.

A major objective then is to grow and make the next step towards a place in the team’s WorldTour Program and to develop these athletes into top cyclists. The team see it as a structure to support a continuous and long-term flow of the most promising German riders entering into the WorldTour.

Team Giant-Alpecin coach Marc Reef commented: “Lennard is one of the biggest talents out there and we’re excited he has chosen to join us. He has proven to be an excellent time trialist but for sure we also recognize his GC qualities. Together with Lennard we are going to work hard in the next years to get the best out of his abilities and to see in which areas he will be at his best at WorldTour level.”

“Traditionally we are very focused on young talents with the aim to develop them into world class riders, and for sure Lennard is one of them. With this very same objective we start our Development Program next year.”

“We want to inspire and support talented riders from a young age, giving them the opportunity to learn that cycling is much more than just having strong legs.”

“The aim is to nurture them to become professional athletes ready for their next step towards the WorldTour, using expert resources and scientific excellence from our WorldTour program to fulfil their full potential.” 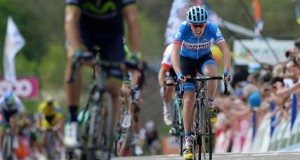 “Hopefully I can find the right tactics to be in front...