Team Africa Rising have announced the formation of the first all-African women’s UCI team to race professionally, with the team set to start next season. They also aim to establish a rider development programme across the continent.

Team Africa Rising has been working across the African continent for close to 10 years with their main project being developing the highly successful Team Rwanda men’s national cycling team which has become a world-renowned brand in cycling and has now delivered several riders into the pro peloton.

Through their work on the continent, Team Africa Rising have become increasingly aware over the past number of years of the rising tide of female cycling talent in Africa.

Kimberly Coats, the team’s Directeur Sportif, explains: “When I watched the Olympic women’s road race a few weeks ago and saw so few women from Africa, I knew it was time. Our goal at Team Africa Rising has always been to raise the level of cycling in Africa for men and women and when I saw how great the women were at our recent training camp, I knew we should now put a marker down and start getting African female talent into the same world.”

“We firmly believe these women can begin to race against the best talent in the US, Europe and Asia to demonstrate the potential of African cycling. We have seen with Team Rwanda how a dedicated, well-run program can flourish on this continent to allow riders to then go to the international scene and compete with pride.”

Team Africa Rising will consist of women from Rwanda, Eritrea and Ethiopia with several cyclists from other countries in consideration. The total squad will employ 10-12 cyclists and be coached by ex-US pro rider Sterling Magnell, who has been working with these riders, and Team Rwanda, in recent years.

The team will be based in the US for the first half of 2017, giving them access to additional coaches, bike technology and cutting edge sports medicine groups through our partnership with Mission Sports Group.

The team state that their focus, outside of winning, “is to inspire women all over the world, women of colour, women from various cultural backgrounds, that they can be involved in sport and achieve great things.”

“The sport of cycling for women is growing rapidly and hopefully sponsors will see the long term potential for supporting women’s cycling,” Coats continues. “The women from these countries in Africa will bring a whole new dynamic to the sport. We must help these women improve their opportunities and thereby their lives.”

“There were only three women from Africa and not one woman of colour in Rio and we are dedicated to getting nearer ten on the start-line in Tokyo! It’s time to literally change the face of world cycling.”

The team have also said that they are actively looking for a lead sponsor for the team and that several other opportunities exist to work with Team Africa Rising in terms of equipment and support of the team. 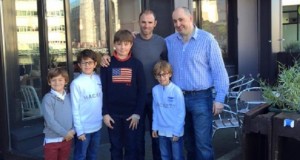 Who turned up at a coffee shop in Cork today only...