Sunday 19th February saw flocks of young cyclists from as far away as Tyrone and Kerry descend on Corkagh Park, Dublin – Cycling Ireland’s only purpose built cycle track – for Ireland’s first ever Irish Youth Cyclo-cross Championships. The sport of cyclo-cross is going through a huge growth, with the style of racing attracting youths from all disciplines of the sport.

The full day of events was hosted by Orwell Wheelers, with the U14 and U16 events recognised as National Championship events and a full programme of support races from U12, U10, U8 and U6. With the focus being on youth cycling for the weekend, the enthusiasm from organisers and participants alike was such that it was apparent this is just the beginning of an exciting movement in Irish cyclo-cross.

Beth McCluskey is the newly appointed Youth Rep on the Cycling Ireland Off-road Commission, and as multiple National Champion in Cyclo-cross she was a key figure in the organisation of this event, along with Orla Hendron, Women’s Rep and Andy Layhe, CX Coordinator.

McCluskey believes the weekend was a big success: “What a great day, we are delighted with how it went. I think having a whole day dedicated to the youth racing has been brilliant – originally we had been thinking about holding it alongside the senior championships, but having seen how well the day went, we can see a separate championships works. It’s better for the kids and better for the parents – and they get a championships run in the same professional way as the seniors.”

Cyclo-cross events are one of the most accessible disciplines of cycling, with courses being designed by event organisers to suit the space available, through the use of tape, posts and cones. Former international cyclist

McCluskey sees cyclo-cross as an ideal base for all disciplines of cycling: “Cyclo-cross works; it’s accessible, you don’t have to be super fit to enjoy it and the bikes are relatively inexpensive. If you look at the course here, we had a fairly flat course, with limited features, which many thought would suit the roadies more. With the help of people like David Conroy we made a good tough course that riders from a range of backgrounds were able to excel in.”

“In the U14 girl’s event you had Caoimhe May winning; she has been so strong in cyclo-cross all year, and her background is in mountain biking and track cycling. She came in ahead of Maria McAllister and Aoife O’Brien who are excellent on the road – in cyclo-cross you have people coming together from all sorts of backgrounds and able to be competitive with each other.”

McCluskey believes that these days are ideal for encouraging more young people into the sport of cycling: “We need more of these days! The Championships were a real festival of cycling – the U6 event was the biggest race of the day! We need to build on this – the U6 racers will be the junior and senior racers of the future. If we can bring back grass track racing we can really encourage this. The mix of technical skills and race skills that they are learning in this really fun and competitive environment is ideal for whatever discipline they choose to go into in the future.” 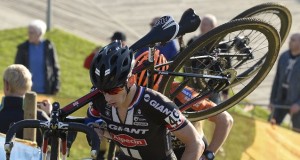