A group of four riders managed to get away 15 kilometres into the stage, but the quartet was never allowed a gap of more than just a couple of minutes. Having both Mark Cavendish and Ryan Gibbons as key players for a possible sprint finish, Team Dimension Data made sure to always keep the breakaway within reach and with about 40 kilometres left to go, it all came back together again.

From here on, it didn’t take long before the inevitable counterattacks began. Cummings joined one of the strongest moves together with Vincenzo Nibali (Bahrain-Merida), Egan Bernal (Androni-Sidermec) and Frederik Backaert (Wanty-Groupe Gobert).

The small but powerful group quickly got a gap of nearly one minute on the peloton before the pack could organise a chase. Taking on the last lap of 7.7 kilometres, the gap came down to just over half a minute but despite a furious chase behind, the break managed to keep the pack at bay and fight for victory.

In the final, Cummings timed his sprint to perfection as he passed his rivals on the final metres to take both the stage win and the overall lead of Giro della Toscana. Tomorrow, the Italian two-days event concludes with a mountain top finish to Volterra.

Steve Cummings: “I wasn’t really feeling super today, having missed so much racing. I couldn’t follow on the explosive climb so I just stayed calm, waited and then went full gas after the climb. It turned out to be a good tactic. Towards the end, we were going so fast at the front that there wasn’t an opportunity to split the group so I just waited for the sprint. I let it all out there and I’m just really happy now”. 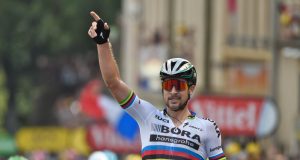 Peter Sagan wins stage 3 of the Tour de France despite...