It was a successful finish to the Critèrium du Dauphiné today for Team Dimension Data for Qhubeka as not only did they take the stage victory with Steve Cummings, but Daniel Teklehaimanot also claimed back the Polka Dots jersey as the best climber of the race. In addition, Edvald Boasson Hagen was able to get onto the podium, taking the overall in the points classification.

The 151km long stage from Le Pont-de-Claix to Superdévoluy saw an early break of 20 riders and the African team had Teklehaimanot, who was equal on points with overnight KOM classification leader Thibaut Pinot, and Cummings in the group.

The peloton, including all the GC contenders, didn’t let them get to far off the front. However, a gap of around two minutes was enough for Teklehaimanot to score the needed points in his fight for glory.

With roughly 70km to go Cummings attacked the break and took off alone. While his move split the former break, Teklehaimanot was able to stay in the chase group, allowing Cummings to increase his lead.

Over the following kilometres, the British time trial specialist opened up a gap of over 2min over the chasers. With 30km and two climbs to go the peloton was another 2 minutes back.

Inside the final 15 kilometres the peloton, led by Etixx-QuickStep, picked up the pace and reeled the chase back in. However, Cummings was able to defend his lead and crossed the line in Superdévoluy 3’58” ahead of Daniel Martin (Etixx-QuickStep) and Roman Bardet (Ag2R).

While the overall went to Chris Froome (Sky), it was the African team, who put on a strong show at the Critérium du Dauphiné. With 2 stage wins, as well as the Green jersey and the Polka Dots jersey Team Dimension Data for Qhubeka left its mark in the French Alps.

Jean-Pierre Heynderickx (Directeur Sportif): “It was an unreal day today, the best for Team Dimension Data for Qhubeka so far. Steve was really strong, it was a great solo. We also wanted to get the Polka Dot jersey back onto Daniel’s shoulders and were able to do so. With two stage wins through Edvald and Steve, and the wins in the Points classification through Edvald and the KOM classification through Daniel it was simply an amazing week!” 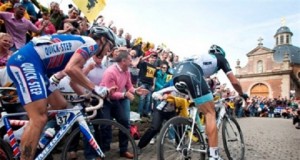