Stephen Roche is best remembered for the incredible Giro-Tour-Worlds treble he achieved in 1987, but it can be overlooked sometimes that he also notched up some other good wins that year including the Tour of Romandie and the Tour of Valencia.

By winning the Tour of Valencia that year, he joined such names as Rik van Looy, Eddy Merckx and Bernard Hinault on the list of victors.

Roche went into the race in good form having gotten into the winning breakaway in the Trofeo Luis Puig just days before the start of the Tour of Valencia with Pello Ruiz Cabestany taking the win.

Amongst the other favourites expected to contend for victory were Roche’s compatriot Sean Kelly, Pedro Delgado, Cabestany and Greg LeMond.

The race started with a 6.7 kilometre prologue in Benidorm which was won by Kelly’s KAS team-mate Jean-Luc Vandenbroucke. The Belgian held on to the leader’s jersey for the next couple of stages as sprinter Mathieu Hermans took the victory in stages 1 and 2.

However, that second stage was surrounded by controversy. The race was run off in appalling conditions as the riders first faced showers of rain as soon as they set off. As the race progressed, the rain turned to hail and then snow.

The snowfall became so heavy that the commissaires neutralised the race at kilometre 92. However, there was no let up of the snow and they had to extend the neutralised section.

When they eventually decided to restart at the town of Xativa, there was opposition from the Toshiba team of Greg LeMond and Pedro Delgado’s PDM team. They decided that the conditions were too bad and refused to restart. They were subsequently kicked out of the race.

The race did eventually get going again, albeit being 50 kilometres shorter than planned. The organisers faced criticism that evening about the original length of the stage. The stage should have been 210 kilometres and some riders and directeur sportifs felt it was too early in the season for a stage of that length.

There were no significant changes to GC as Vandenbroucke held on to the lead. That evening, the directeur sportifs of the two eliminated teams asked the race organisers to be reinstated, but their requests were turned down.

Roche came to the fore the next day on Stage 3a when he finished in third place, 12” behind stage winner Bernard Richard of the Fagor team. That afternoon, the riders faced a 12.8 kilometre time-trial.

The elimination of LeMond and Delgado was no harm to Roche and Kelly’s chances and the Dubliner stepped up to the mark in the time-trial beating Vandenbrocke by 5” and Kelly by a further 4”. The stage was marred by further controversy though as Marino Lejaretta crashed following an incident with a spectator.

The Spaniard was hospitalised but suffered no serious injuries. The UCI meanwhile announced that there would be sanctions against the PDM and Toshiba teams for the stance they took the previous day. They were to be ruled out from starting Paris-Nice the following month.

The fourth stage took the riders from Torrent to Alcala but before they set off, the riders held a protest to highlight what they felt was a lack of security at the race which had resulted in Lejaretta’s crash. The stage was won by Juan-Martin Zapatero Marcos as Vandenbroucke held on to lead.

Mathieu Hermans took his hat-trick of stage wins the following day in Vall de Uxó with Roche finally unseating Vandenbroucke from the top of the standings with just one stage remaining.

That final stage was just 60 kilometres in length and Kelly took the stage in a sprint finish from Frank Hoste and Pello Ruiz Cabestany with Roche winning overall by 23” from Jesus Blanco Villar with Kelly finishing in 5th place, 40″ down. 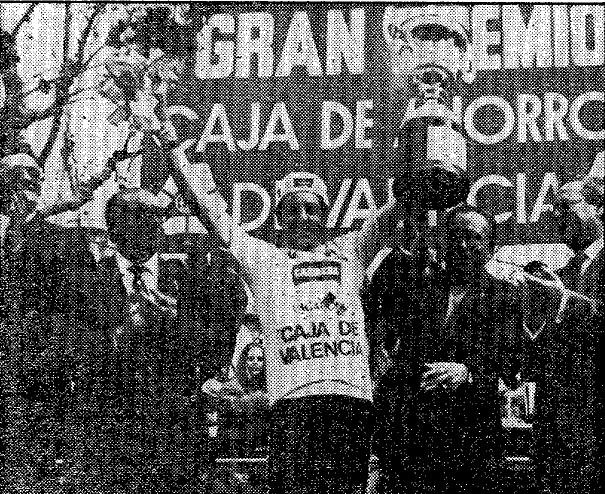 Roche and Kelly would clash a few weeks later at Paris-Nice with Kelly coming out on top. The decision to prevent PDM and Toshiba from starting the Race to the Sun was overturned. However, LeMond had already decided to start Tirreno-Adriatico instead.

It was at the Italian race where LeMond crashed and fractured his left wrist. He returned to the US to recuperate and it was while he was at home that he was accidentally shot by his brother-in-law and came close to bleeding to death. It would take two years for the American to get back to his best. 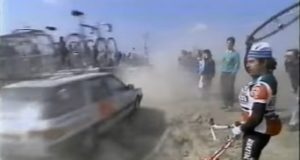