Simon Yates (Mitchelton-Scott) finished second on today’s nineteenth stage of the Vuelta a España and has now extended his overall lead to one-minute 38 seconds with one difficult and decisive mountain stage to come tomorrow.

Movistar Team were motivated from the outset of the first of two final decisive stages of this year’s Vuelta as they moved immediately to the front of the peloton to control and chase any moves that dared to try off the front.

The Spanish outfit, sitting 25 seconds down on the general classification at the start of the day, eventually let a move of two gain over two minute’s advantage as they entered the final 50 km but it still didn’t look hopeful they would survive to the final and they were eventually caught on the low slopes of the final climb.

The group began to whittle down immediately on the climb, but it was Nairo Quintana (Movistar Team) who was the first to attack. The Colombian was joined by George Bennett and Steven Kruijswijk (Team LottoNL-Jumbo).

Bennett dropped off the front as Pinot was the next to jump across keep three in the lead. Jack Haig kept the pace up just behind for Mitchelton-SCOTT and had the gap within 12 seconds when Yates attacked with 10km remaining.

Joining the trio in the front, Simon shouldered a lot of the work and as Quintana dropped off to help Valverde. Pinot also joined in and assisted with the workload in the hunt for his second stage win.

There was no cooperation in the chase behind and Adam Yates patrolled the unorganised chase for Mitchelton-SCOTT in case of a regrouping. Eventually, Pinot sprinted to the stage victory with Yates in second place for extra bonus seconds on top of those made over the line.

Simon Yates: “I felt good, I felt good myself which is why I tried, the team did a fantastic job again, Jack Haig did a good ride to really set me up before I went away and Adam was behind in case I came back. We did fantastic job.

“I have to thank Thibaut for helping me a lot in the final, of course he could have sat on and not helped, so chapeau, you don’t forget things like that very fast.

“We didn’t really have any plan today, just to see how we felt, keep control and calm and I was. When you feel good you have to try sometimes so I did.

“There is only one more day to go, we really need to focus on that now, we will enjoy this moment but it is not over for another day.

“I know too well in one-day everything can chance so we will try to recover and give it everything to try and win the race now. I will just try to stay focussed now, it is not over until it is over.” 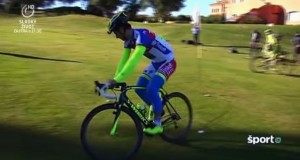