The Irish rider Shay Elliott made his Tour de France debut in 1956, but unfortunately had to withdraw early on in the race, having sustained injuries from a crash prior to the start of the Tour.

Two years later he lined up again, and did make it to Paris this time, despite having suffered an incredible amount of misfortune along the way. His determination to make it to the finish was unwavering though and in doing so, he became the first Irish rider to finish the Tour de France.

Shay was a member of the International team alongside three Britons – Brian Robinson, Stan Brittain and Roe, four Danish riders, two Portuguese and two Austrians. Robinson tasted success in the race when he won stage seven to Brest. Arigo Padovan had crossed the line first, but was relegated to second for his tactics in a hot sprint. Robinson became the first British rider to win a stage.

Elliott meanwhile suffered his first misfortune on the opening stage to Brussels when he crashed and cut his knee. He still managed to finish seventh though.

The following day, Elliott got into a break but was held up by a level crossing and the bunch simply ignored instructions to allow the same gap to the break before they were held up by the train. Once again though, he still managed to get a good placing as he finished third on the stage. He claimed after the stage that his jersey had been pulled in the sprint but his claims were ignored by the race jury.

His misfortune continued on the ninth stage of the race from Quimper to Saint-Nazaire. He managed to get in the winning break but had a mechanical near the finish and could only manage seventh.

The Tour entered the Pyrenees a few days later and on the descent of the Col d’Aubisque Elliott punctured. He then crashed on the same descent but pushed on to the finish.

Elliott struggled with his injuries the following day and came in 25 minutes behind the stage winner, Federico Bahamontes. His morale was still good though as he joked afterwards that he was going so slow that he had time to admire the scenery.

Illness struck Elliott when the race moved to the Alps as he suffered a bout of bronchitis. He was determined to keep going though.

“I don’t want to drop out. I want to stay to the end to save the honour of Ireland,” he told reporters after the stage.

Elliott was to crash again on the epic stage from Briançon to Aix-les-Bains where he suffered abrasions on his arms and legs but refused medical attention. As if that wasn’t enough, he also had two punctures on that stage won by Charly Gaul.

He was just a few days from the finish in Paris when he was struck down by another illness, dysentery. By this stage he was really struggling and in the final time-trial he was caught by a number of riders who set off behind him.

He had nothing left in his legs at this stage and sat behind one of the other riders in the time-trial, not caring if he received a penalty. He just wanted to get to Paris, and he did.

Elliott finished the race which was won by Charly Gaul, in 48th position, thus becoming the first Irish rider to finish the Tour. 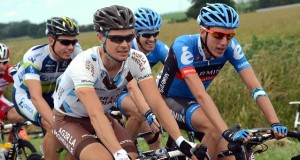 Could we see a record five Irish cyclists at the Tour...