Irish riders Sean McKenna and Angus Fyffe will make their first competitive start for the An Post Chain Reaction team this weekend, with the duo officially joining the squad as of the 1st of August and they will be part of a strong eight man team this Sunday, 7th August, at Antwerpse-Havenpijl (1.2) in Belgium.

Fyffe and McKenna trained previously with the squad in Calpe, Spain, in January of this year, under the agreement that they would join in a full capacity upon completion of their studies.

Kurt Bogearts, An Post Chain Reaction team manager, believes McKenna and Fyffe will bring a new energy to the squad.

“Both guys have trained with us before so we know they will be good additions to the team. They’re both very talented. I’ve watched them both for quite some time and I think there is a lot of potential there. They’re hungry to learn so I think they’ll develop very quickly.”

The An Post team has every reason to feel confident heading into this weekend’s race. Coupled with last year’s victory, Jasper Bovenhuis posted a magnificent win at the Belgian Pro Kermisse Race Westrozebeke two weeks ago before finishing in an impressive 23rd place at the Prudential Ride London Surrey classic last weekend. 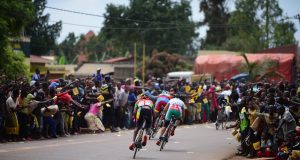