Sean De Bie (Lotto-Soudal) took the win in the Boonen and Friends charity cyclo-cross today at Zilvermeer in Tom Boonen’s home town of Mol in Belgium.

The event consisted of two races – Boonen & Friends and Kampioencross. The startlist for the Kampioencross included ex professionals such as Bart Wellens, Fons de Wolf, Niels Albert and Tom Steels.

The Boonen and Friends race included a lot of current big names from the road. As he is still recovering from his injuries sustained in a crash in the Abu Dhabi Tour, Boonen was unable to take part.

Former world cyclocross champion Zdenek Stybar started half a minute behind the rest of the pack, but was unable to get across to the leaders as De Bie took the win ahead of Maarten Wynants (Lotto-Jumbo NL) with Bert Van Lerberghe (Topsport Vlaanderen) in third. 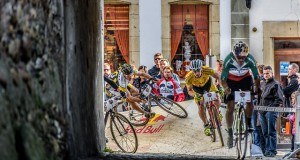