The riders at Paris-Nice faced another tough day today with rain, crosswinds and low temperatures on the 195-kilometre second stage to Amilly.

The peloton split to pieces soon after the start, with a lead group of 22 riders forming at the head of the race. Included in this lead group was Sam Bennett (Bora-hansgrohe) which put him into a great position for a good stage result.

At the feed zone, the gap between the first and the second group which included Alberto Contador (Trek-Segafredo) was already two minutes.

However, Trek, Orica-Scott and Astana joined forces in the second group, and the gap started to drop again, and 15 kilometres later the groups came together before another group of 5 riders pulled away from the peloton. Unfortunately, Bennett had a puncture but rejoined the first big group after a wheel change.

But after a hard day, nobody could hold off the first bunch and with 5 kilometres to go, all escapees were reeled back in. At the end Sonny Colbrelli (Bahrain-Merida) proved fastest with Bennett finishing the day, plagued from cramps, in 11th place.

Sam Bennett – “It was a really hard day out there. From the beginning the race was full on and I had to push hard once to make the split. On the last 30k I had cramps almost all the time. In the sprint, I couldn’t get of the saddle any more. I was on Greipel’s wheel but I didn’t have any power left to accelerate.”

Jens Zemke – Directeur Sportif – “This was one of those days you will never forget as a rider. It was extremely tough out there. Sam did a great job to be all day long at the head of the race. Also Michael showed a strong performance being able to rejoin Sam on the last 50k. After such a hard day, it’s not about your sprint ability any more, it’s more about who has got the most energy left, and with cramps you have no chance anyway. So I am really satisfied with Sam’s ride today.” 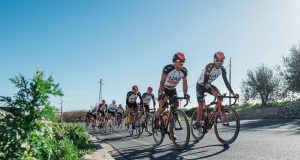