Julian Alaphilippe and Sam Bennett are set to lead Deceuninck – Quick-Step at the Tour de France which starts on Saturday.

Two months later than scheduled, the Tour de France is set to start from Nice which will host the Grand Depart for the second time in history, after 1981. This 107th edition is widely regarded as one of the toughest in recent memory, with the summit finishes to Orcières-Merlette, Grand Colombier, Villard-de-Lans, Méribel and La Planche des Belles Filles (where the race’s sole individual time trial will take place on the penultimate day) being just some of the highlights.

The man who lit up last year’s edition with two memorable stage wins and a superb 14-day spell in the prestigious yellow jersey, Julian Alaphilippe returns to the race, having shown some strong form in his last appearance before travelling to Nice – the French Championships held in Grand-Champs.

Having raced the Tour de France twice, in 2015 and 2016, Sam Bennett will be back on cycling’s biggest stage after four years with the goal of taking at least one win and completing a set of Grand Tour stage victories. The Irish Champion will rely on the services of Michael Mørkøv, one of the most experienced and valuable lead-out men in the peloton, who will be making his 11th Grand Tour appearance.

Newly-crowned Danish Champion Kasper Asgreen, Tim Declercq, Dries Devenyns, Bob Jungels – who two years ago came just outside the top 10 overall – and 2015 Le Havre stage winner Zdenek Stybar will round out Deceuninck – Quick-Step’s roster for what will be the season’s first Grand Tour.

“For Julian it will be very difficult to repeat last year’s Tour, but at the same time, it’s not necessary to do it,” said Deceuninck – Quick-Step sports director Tom Steels. “We will take it with him day by day and see what happens. There are some nice opportunities for him, but I can tell you we aren’t thinking of a scenario similar to that of the previous Tour. In Sam, we have a contender for the bunch sprints, which won’t be so straightforward as in the past, the route being one of the toughest in recent memory. I think there are maximum four clear stages for sprinters spread over the three weeks.”

“Michael will be Sam’s last man and will guide him through those hectic final kilometres, but also Kasper and Styby will play an important role in his lead-out train, while at the same time keeping an eye on breakaway opportunities. Bob and Dries are both riders who can support Julian, they have a lot of experience and can help him in the finale. Last but not least, Tim will do what he does best: control the race. He is a world-class domestique and has the power and knowledge to do it”, concluded Steels. 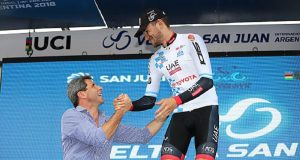