Ruth Winder (Team Sunweb) has won the fifth stage of the Giro Rosa today after being part of a successful late breakaway. Her first Women’s WorldTour win, she takes over the overall race lead and is the fourth rider from Team Sunweb to wear the Maglia Rosa during this year’s race.

Winder finished 1″ ahead of Tayler Wiles Trek – Drops) with Alice Maria Arzuffi (Bizkaia Durango – Euskadi Murias) in third on the same time as Wiles. Winder now leads by 1’18 overall from her team-mate Leah Kirchmann with another Team Sunweb rider, Lucinda Brand in third at 1’24”.

Winder said: “For the first 80 kilometres we stayed safe and calm together in the bunch. We had Liane in the early break which was great and when that came back, we focused on positioning for the climb. The team did a really good job setting this up. I felt good over the top so we made it really hard and I put in attack and got away with two others. Coming into the sprint I had good legs and put my all in to take the win.”

Team Sunweb coach Hans Timmermans said: “We had Liane in an early break which was a good situation for us. They were caught back before the climb and we had full focus, watching for attacks. When they didn’t come, Ruth attacked on the plataeu and rode a strong final 25 kilometres, with the team covering the peloton behind. She stayed cool in the final and won the sprint from the break. It’s a huge bonus that she’s the fourth rider in the team to wear the Maglia Rosa.” 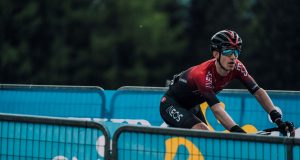