After announcing a number of new prominent rider additions to the Dimension Data team (formerly MTN-Qhubeka) for 2016, the African squad have now announced that Rolf Aldag will join the management team for the upcoming season.

Aldag joins Team Dimension Data with immediate effect, taking on the role as the team’s Performance Manager. In the past couple of years, he played a vital role in terms of success for teams like HTC-Highroad and Etixx-QuickStep, where he now joins the African team from.

Rolf will be a familiar face to many of the riders and management team already, having worked and ridden with them in the past.

Rolf Aldag – Performance Manager
I am happy to join Team Dimension Data, as the outfit will be known from 2016. As a South African resident I have a good understanding of Qhubeka’s importance. I know how much impact the charity has on the lives of children and the future of the country. I am looking forward to play an active role for Qhubeka and hope to add some value to the team’s sporting success.

Douglas Ryder – Team Principal
I am really excited to have one of the most experienced individuals in cycling join our team. Rolf has helped teams in the past excel on a performance level and a technical level and we look forward to the contribution he can make in our team as we embark on the next phase of our journey. 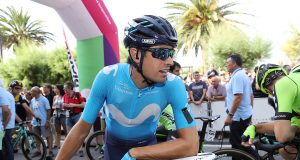