Following on from the recent announcement of various rider and staff additions to Team Dimension Data for 2016 including Rolf Aldag and Mark Cavendish, the African team have today announced that Roger Hammond will also join their management staff for the upcoming season.

Hammond will take on the role of Sport Director. He joins the team after serving as Team Manager at Madison-Genesis since 2012. The Briton also had an illustrious pro career spanning between 1998 and 2011 that saw him specialise as a classics rider.

Roger Hammond – “I am very excited to be joining this fantastic project, with so many ex team mates or managers within the team it feels like I’m returning to my family. Cycling has been so influential in the path my life has taken and the rich experiences I have enjoyed along the way.”

“To be part of this project that not only focusses on giving riders the chance to achieve their dreams competitively but – by supporting Qhubeka – also giving children the chance of an education through the medium of the bike was an opportunity not to be missed.” 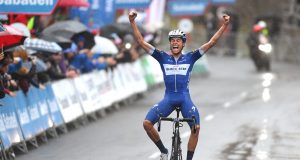