Rick Zabel (Team Katusha – Alpecin) claimed the victory in a bunch sprint on the second day of the Tour de Yorkshire in Bedale, as Jesper Asselman (Roompot – Charles) retained the overall lead.

Huge crowds gathered in Barnsley to see the peloton roll out at the start of the stage, and they didn’t relent on the picturesque 132km course that wound its way north through the county. According to police, 340,000 people witnessed both the men and women in action, with Lorena Wiebes (Parkhotel Valkenburg) having taken the spoils on the opening stage of the Asda Tour de Yorkshire Women’s Race earlier in the day.

Six riders formed the breakaway in the men’s race, and from those it was Jake Scott (SwiftCarbon Pro Cycling) who was voted the most active rider in a live Twitter poll at @letouryorkshire. As a result, he will wear the grey jersey sponsored by Dimension Data on Saturday. Despite their best efforts, those riders couldn’t repeat the great escape which saw Jesper Asselman (Roompot – Charles) seal a dramatic triumph on stage one, and it was the sprint specialists who worked their way into contention on the fast approach into Bedale.

By the time they reached Market Place the pace had ramped up even further and it was Zabel who hit top speed and romped to victory. The win was his first since 2015.

Despite that triumph Zabel couldn’t knock Asselman off the top of the overall standings and Asselman will wear the blue jersey sponsored by Yorkshire Bank once again on Saturday’s stage from Bridlington to Scarborough.

Stage winner Erik Zabel said: “It was emotional for me to win today because it has been almost four years and tears came to my eyes. It was super nice because I am normally a lead-out man and this victory gives me the belief I can win at this high level.

“I really enjoyed today. It was special to ride the circuit in Harrogate as well. It’s going to be a beautiful parcours for the World Championships, and while it will be great for the fans to watch, it’ll be hard for the riders. We’re all looking forward to it though because we know it’ll be an amazing race in September.”

Race leader Jesper Asselman said: “It was a tough stage, especially on the World Championships circuit, and my team had a good day because we defended the blue jersey and also got Boy [Van Poppel] in the green one. Hopefully the next few days will be equally good but it gets a lot harder from now on with a lot of steep climbs and I hope I can stay up there.” 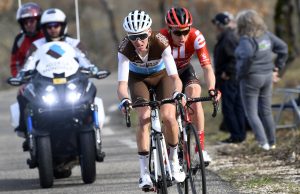 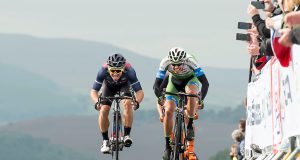