Remco Evenepoel (Deceuninck – Quick-Step rider) has taken his first victory of the season and the sixth of his pro career on the 15.2-kilometre individual time trial at the Vuelta a San Juan.

The 20-year-old confirmed his favourite tag, putting in an impressive ride that saw him record the fastest time at the intermediate checkpoint and set the early mark for success. Not even the 1200m climb of Punta Negra – which had a 7.8% average gradient – could slow down the reigning European Champion of the discipline, who stopped the clock in 19:16, a time more than half a minute faster than that of runner-up Filippo Ganna (Italian National Team).

“The time trial was short, but it felt like the longest one I did in my life because of the straight roads, even the climb felt endless,” said Evenepoel.

“I went for the win and getting it makes me happy. Today I gained time on the flat, where I could sustain a strong pace, but also on the climb, where I accelerated. This means I had good legs, which is a nice feeling so early in the season.”

Evenepoel, who leads a stage race for just the second time in his career, downplayed any talks about the general classification, which will be decided on the long climb of Alto del Colorado: “It was my first time trial of the year, my first time in the European Champion jersey, and my first victory. It’s nice to be atop the overall standings, but we don’t have to lose our focus, as there are still four more stages to go. I’m not thinking about winning the GC, just taking it one day at a time, continue helping the team whenever and wherever I can, and we’ll just see at the end of the week where that takes me.” 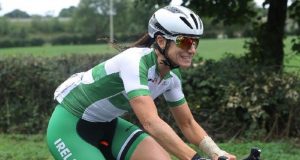 Eve McCrystal focusing on both domestic and international targets in 2019