The men’s and women’s sprint and omnium competitions took centre stage on day two of the Dublin Track Cycling International, with a series of hotly contested races playing out under the baking sun at Sundrive Velodrome.

The weather could not have been in starker contrast to the miserable conditions on day one and allowed the riders to leave everything on the track.

Early in the morning, the 200m individual sprint TT saw Olympic gold-medallist Jason Kenny lay down the standard in the men’s with a 10.621-second time. Mohamed Shah Firdous of Malaysia took 2nd place and Irish powerhouse Eoin Mullen pulled out a superb 10.812 to nab 3rd.

In the women’s event, track records fell like dominoes. First, Victoria Williamson took Robyn Stewart’s record with a 12.144, before Italy’s Elena Bissolati turned in a 12.143 less than five minutes later.

But the drama wasn’t done there: Britain’s Sophie Capewell hammered out an 11.892, the first ever sub 12-second time for this event at Sundrive, a feat that was quickly repeated when Charlene Du Preez of South Africa came home with 11.936. Capewell’s mark was good enough to take the spoils ahead of Du Preez and Bissolati.

Then, Aran Islander Mullen showed his power again in the sprint competition, holding off some strong opposition and only being narrowly edged out in the sprint semi-final by Asian champion Mohammad Awang.

But the diminutive Malaysian flyer couldn’t hold off the sheer strength of Kenny in the main final – the Briton was the star of the show and displayed exactly why, taking top spot with relative ease. For Mullen, now based in the USA, the end result was a very creditable bronze in an event featuring some world-class talent.

The men’s omnium was won by British prodigy Ethan Hayter, who in truth never looked like losing. German Max Beyer and Dane Niklas Larsen were the best of the rest – Beyer was unlucky to suffer a mechanical when going nicely in the points race, but Hayter was well worth his win.

Taking the women’s omnium in fine style was the outstanding Julie Leth (Denmark), who was in control of the competition throughout. Emily Kay turned in a fabulous late-in-the-day performance in the points race to claim silver in front of Germany’s Gudrun Stock, while Ireland’s Shannon McCurley tired towards the end of a tough day, having been in a great position prior to the final event. 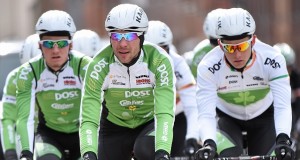