The organisers of the Rás Tailteann have now announced that the race is set to return to the calendar in 2020, following on from the cancellation of the 2019 race.

The race was first run in 1953 and had been a world ranking race since 2000. Being part of the international calendar had increased the profile of the event, but the extra requirements under UCI rules greatly ramped up the budget.

The race finances were covered in recent years by An Post, but it stepped back from its backing of the race specifically and cycling in general in 2017. The Rás Tailteann took place in 2018 thanks to a reserve fund, but the depletion of that fund and no new backing resulted in the race not taking place this year.

The organisers announced the news on Facebook and their statement is as follows:

The Rás will find its rightful place back on the Cycling Ireland calendar in 2020, promoted and run next year by a newly-formed promotions group, Cáirde Rás Tailteann, and thanks in huge part to significant collaboration with its historical organising club, Cumann Rás Tailteann.

Cumann Rás Tailteann have this week shown huge support to the promotions group, which compromises a number of long-time volunteers on the Rás, to run the race next year.

Following a long and committed search for sponsorship for Rás Tailteann, 8 Day International Race in 2019, the race ultimately fell victim of insufficient financial support and dropped off the calendar. Today the historical organisers confirmed that they will not themselves run an event in 2020, but are delighted to see the race go ahead under new organisers, with Cumann Rás Tailteann’s full support.

The promotions group will continue to follow the historical identity of the Rás Tailteann in the ethos of County and International teams. The 2020 edition of the Rás is likely to be over fewer days, possibly five, but the new organisers endeavour to promote this unique Irish race back to its UCI status in the coming years over eight days.

Eimear Dignam from Cumann Rás Tailteann said “We are thrilled to see this legendary race continue. It has a special place in the hearts of not only the cycling community in Ireland, but also now in the hearts of those who’ve competed in it from around the world. We know the new organisers extremely well, having worked with them on the race for many years, and we’re delighted to have them take up the mantle.”

The new promotions group comprises well known volunteer figures who’ve been involved in the Rás over the last decade.

Ger Campbell from the new promotions group adds; “On behalf of the promotions group and entire cycling community in Ireland, we would like to thank Cumann Rás Tailteann and the Dignam family for entrusting us with the organisation of this great race going forward. We are honoured and excited about putting this race back on the calendar from 2020 and look forward to seeing all the old faces, and undoubtedly some new ones becoming Men of the Rás.”

It is anticipated that more details of the new race will emerge in the coming weeks. 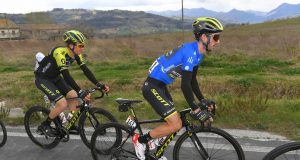