A strong and experienced Quick-Step Floors squad will take on the 42.5km-long World Team Time-Trial Championships in Bergen tomorrow where they will aim for a fourth title.

Since the team time trial for trade teams was introduced at the World Championships back in 2012, Quick-Step Floors were always in the fight for the medals and came out on top in 2012 (Valkenburg), 2013 (Firenze) and 2016 (Doha) – in addition to taking two more sets of medals, bronze in Ponferrada and silver one year later, in Richmond.

This season, the race will be held in Norway, between the small town of Askøy and Bergen, the second-largest city of the country, on one of the toughest courses in the event’s short history: cobbles, narrow and rolling roads, two hard climbs – Loddefjord (600m, 10%) and Birkelundsbakken (3km, 6%) – and tricky descents.

Niki Terpstra, one of the only three riders to have won a hat-trick of titles, will race the World TTT Championships for the sixth consecutive year, with three other riders from last edition’s winning team set to join him: Giro d’Italia maglia bianca Bob Jungels, Vuelta a España stage winner Yves Lampaert and the relentless Julien Vermote.

Rounding out the six-man squad for Norway are Kiwi powerhouse Jack Bauer and Philippe Gilbert, the first rider in over two decades to win a cobbled Monument and an Ardennes Classic in the same season. Laurens De Plus, who’s been selected to ride the ITT for Belgium, will be the first reserve.

“We come here with a very strong and well-prepared team, built around experienced riders and former champions of the discipline, so we are quite confident in our chances of getting another good result. We trained really hard for this, in the past weeks we simulated on many occasions the Bergen parcours and I could see that the guys were ready for it, so I’m confident they’ll show their determination and motivation on the road when it will matter”, said Directeur Sportif Tom Steels.

Steels offered his take on the challenging parcours in Norway: “It’s up and down, a roller coaster which doesn’t allow you to make any mistakes. There’s no metre of flat, it’s totally different than what we had last year in Qatar, and the weather could play a crucial role in the outcome, as the rain can turn the fast descents into a skating rink.

“And let’s not forget the 400m-long cobblestone stretch placed not far from the finish, which can also impact on the race. This being said, it’s a race where the strength and cohesion of the team will be key factors at the end of the day.” 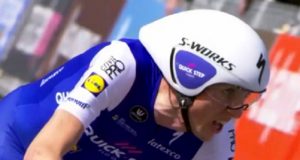 Dan Martin moves into top 20 at the Critérium du Dauphiné