Philippe Gilbert (Quick Step Floors) has been given the green light to start training again, following on from his crash at Amstel Gold.

The Belgian Champion suffered a kidney tear in the crash but still went on to win the race. However, he was then forced to miss both Flèche Wallonne and Liège–Bastogne–Liège due to the injury. Today he returned to training, on rollers.

Gilbert will make his first appearance in two weeks this Saturday, at Zilvermeer, which plays host to the “Tom says Thanks” event, where Tom Boonen will race in front of his fans, together with Gilbert, Marcel Kittel, Peter Sagan, Michal Kwiatkowski, and many other big names of the peloton.

Then one day later, he will line up at the start of the race he organizes, the “Philippe Gilbert Classic”, in the Belgian municipality of Aywaille. 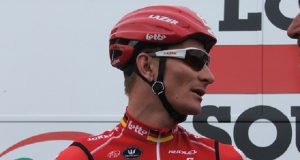