A petition has been launched on change.org looking for cyclists to require insurance for using roads in the U.K.

The petition was established by Owen McDermott and at the time of writing, had reached 2,708 signatures.

Although the title of the petition is “Cyclists to hold insurance to use public UK roads”, Mr. McDermott appears to go off topic somewhat requesting that cyclists should also have to sit a theory and practical test to obtain a driving licence, that they should have to stick to cycle paths and also points out that cyclists don’t pay “road tax.”

His petition has received a mixed response based on the comments below his statement.

Luke Thorley pointed out that road tax doesn’t exist saying: “Public liability insurance for sure , but there is no such thing as road tax …. I think you are referring to vehicle tax which based on emissions, there for what emissions are cyclists giving off apart from odd farts”

Martin Golder also mentioned the reference to road tax saying: “I am signing because I want to see this fail miserably. The creator of this petition has no clue about how the system works at all.”

“Road Tax does not exist! Nobody pays Road Tax. You pay an amount based on the emissions of your vehicle, so, go ahead and push you hilarious petition, as if it ‘succeeded’, cyclists would still be allowed to ride on the roads and also have to pay £0 in imaginary ‘road tax’. Bravo.”

Simon Clarke responded to the petition saying: “This is ridiculous to even think about taxing this ! Taxing ppl for getting out and about, getting fit and just generally enjoying the fresh air ! Are you going to charge for fresh air next !?? sort it out n start cutting mp wages !!!”

There were also some comments in favour of the petition such as Sarah Gosling who said: “I’ve had to pay for damage to my cars caused by cyclists. Bicycles on the road should have number plates visible clearly from behind,” and Sefer Dokulup who said: “İm signing this petition because i believe a cyclist neess to pay İNSURANCE AND ROAD TAX like everybody else and deffinitly need to take theory and practical exams because its bıt FAİR”

The statement from Mr McDermott explaining his petition are shown below:

The public roads built for motor vehicles are becoming unsafe to use due to one particular community that feel they are eligible to drive on public UK roads.

Not only that these cyclists posses no insurance for their chosen 2 wheeled non mechanical death trap, neither do they pay road tax.

A recent video created by the West Midlands police has lead me to creating this petition:

Just like having to sit your theory and your practical test to obtain a driving license, Cyclists should have to do the same. What training have they had to use the road safely?

Insurance, if a cyclist throws him/herself into the back of a stationary motor vehicle… Who’s to blame? Not the cyclist… The driver of the motor vehicle would have to pay their own excess to repair the damages.

Tax, Cyclists pay £0 in road tax which I understand they are emission free but in which case they aren’t paying any money to use the public roads.

Im not sure on the percentage of how many cyclists die every year due to cycling on the road but if you stick them back on the paths in a cycle lane I’m sure a lot more people will survive.

Thank you for taking the time to read this. 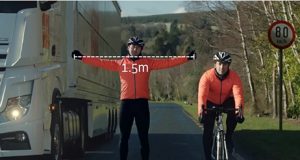