Peter Sagan (BORA-hansgrohe) won Paris-Roubaix today after an incredible solo attack and managing to hold off his chasers for over fifty kilometres. It marked the second Monument win for the Slovakian.

It was a race where the win had eluded the UCI World Champion so many times, but today Sagan not only won Paris-Roubaix for the first time in his career, he also won it in style. Sagan went on an audacious attack with 54 kilometres remaining that left his rivals unable to react.

Sagan was left to disappear on up the road, first bridging to the breakaway before working with the escape to build the advantage back up, exceeding a minute and hitting 1’30” at its peak. One by one the breakaway riders dropped off until it was just two – Sagan and Silvan Dillier (Ag2R La Mondiale) – and while the chasers managed to reduce the time gap, the number of kilometres remaining was dropping at a faster rate.

The chasers including Niki Terpstra (Quick-Step Floors), Wout van Aert (Vérandas Willems-Crelan), Greg Van Avermaet (BMC Racing Team), Jasper Stuyven (Trek – Segafredo), Sep Vanmarcke and Taylor Phinney (Team EF Education First-Drapac p/b Cannondale) reduced the pair’s lead to less than 40 seconds at one time before the duo extended the time gap, and as the final kilometres came into view and the Roubaix velodrome loomed large on the horizon, there was no doubting that one of these riders would take the win.

Dillier led the pair on the velodrome track and Sagan came off his wheel before the final bend to cross the line first to become the first rider to win in the Rainbow Stripes of UCI World Champion since Bernard Hinault in 1981. Terpstra attacked late to go on to take the final podium spot.

“It’s amazing to win Paris-Roubaix,” said Sagan afterwards. “I’m so tired after this race but I have to say, this year I wasn’t involved in any crashes, I wasn’t feeling tired at the start and just tried to save energy. After I went in the attack I just kept going until the finish. I feel so much better than I have done in all the years I’ve ridden Paris-Roubaix – I was so much more tired then than I am today.

“Thank you to all my teammates, because they did such a great job – Daniel Oss, Marcus Burghardt and Maciej Bodnar, my brother Juraj and to Andreas Schillinger and Rüdi Selliger at the start, who kept the group all together. In the end, I made the winning move with around 50km to go and I’m very happy to have come in first. It’s an amazing feeling. I always try to do my best and to get the best results.” 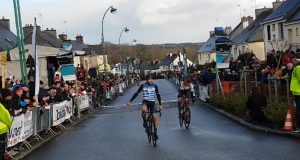 Conn McDunphy edged out for win at Route Bretonne (VIDEO)