Today’s stage of the Tour de France was the last chance for the sprinters before the Champs Élysées on Sunday. Looking to take a hat-trick of stage wins, the UCI World Champion, Peter Sagan battled with his rivals on the hard finale in Berne to take the stage win by a tyre’s width.

Half the stage in France, half the stage in Switzerland – the Tour de France moved into its third country of the race, having already visited Spain and the Principality of Andorra.

Ahead of the second rest day as the race entered its final week, the 209km route from Moirans-en-Montagne to Berne, the Swiss capital, took in an undulating parcours that while hilly, crossed only one categorised climb – the fourth category Côte de Mühleberg.

This didn’t mean the day was going to be easy, however, with temperatures approaching 30° and the long distance – the 7% and then 6.5% kicks just before the finish might prove too much for the pure sprinters.

Ten kilometres into the stage and the break of the day escaped consisting of the Etixx-Quick Step duo Julian Alaphilippe and Tony Martin.

On such a long and arduous stage in such warm weather, the peloton was in no hurry to chase the pair down. Behind the leading pair, Sagan was first from the bunch to collect the remaining points at the intermediate sprint to add to his green jersey total. The peloton reeled in Alaphilippe and Martin to set up a bunch finish.

High speeds and a winding street circuit were the theme of the final 10km as the race entered Berne where the riders had to contend with cobbles and tight turns, in addition to the high pace.

Attacks came as the puncheurs tried to get away and deny the pure sprinters, and on the final drag just before the flamme rouge, the effort was showing on the faces of the riders.

Sagan was still looking strong however, and with an immensely strong finish, he took the win in the bunch sprint by a tyre’s width ahead of Alexander Kristoff (Katusha) to extend his lead in the Green Jersey contest and to take his tally of wins in this year’s race to three. 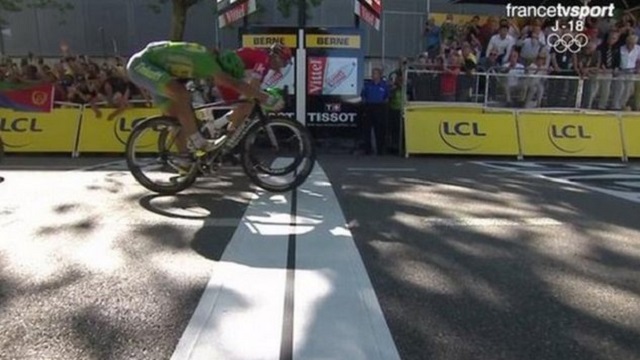 After such a hard-fought contest for the win, Sagan was thrilled with the outcome. “I am so happy, so proud of my team as they did a very good job, I’m so happy to win for them, for Tinkov and for Oleg. A lot of times I lose the race by this much and today I won. I believe in destiny and today it’s turning back. There are fans here from Telekom Slovakia and it’s very nice they can be here to see me and cheer for me today.”

With such a close finish, it took some time before he found that he’d won the stage after a photo finish review. “It was a very long stage, very hot and my teammates did a great job and pulled all day because we knew the final was good for me. We’re in the third week so you can’t say who’s the best for a finish like this but I did my best and I think Alexander made a mistake in the jump for the line – I didn’t know I’d won, it’s was a nice surprise today.” 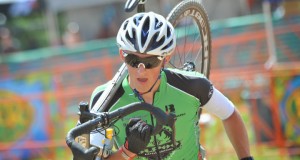