Peter Sagan took his first victory today in the rainbow stripes of the UCI World Champion’s jersey at Gent-Wevelgem. In the second of the four cobblestone classics, and in a contrast to his win in 2013 which he won after a solo breakaway, Sagan took the win in a four-man sprint, having escaped in a group 34km from the finish.

Speaking at the finish, a thrilled Sagan talked about his first win. “I’m very happy that I’ve won finally with this jersey. It’s an important race for me also – it’s the second time I have won here. I want to dedicate this victory to my father in law as he had a hard time yesterday and I’m very happy to have won this race for him, and for our team owner, Oleg Tinkov.”

The 234km course was flat for the first 125km, but these more open sections of the course were exposed and windswept, sapping the energy reserves of the riders. After this, at 140km, the climbs came thick and fast – ten climbs in the space of 65km. It was on these climbs the race would be won or lost.

Sagan was in the front group from early on in the race, among the other race favourites, but stayed hidden in order to save energy for the finish. A tailwind was helping the bunch along for the first half of the race, but the riders knew this would be working against them on the home stretch. Hitting the major climbs, the field was stretched out, however no major splits had formed. It was after the final climb, the Kemmelberg, that the decisive move was made and the race was on.

With 34km to go, Fabian Cancellara of Trek-Segafredo went, taking Sagan with him, and bridging the gap to Katusha’s Kuznetsov, who was further up the road. Having been joined by LottoNL-Jumbo’s Vanmarcke, the breakaway quickly built up a lead of 35 seconds on the rest of the peloton.

With 5km of the race left and a 45 second time gap, it seemed certain the break wasn’t going to be caught. The chase had fallen apart, meaning it was all down to the four riders in the breakaway, and the race was to be decided with a sprint to the line. At less than 2km to the finish, the breakaway slowed, looking at each other to see who was going to make their move. Finally after Cancellara feigned an attack, Kuznetsov went and Sagan followed, using the Russian rider to lead him out and take the win in the sprint.

From the finish, Sagan described the break. “The final was very hard because we were in a breakaway. I wasn’t going to make the same mistake as before and pull until the finish. We had a gap, I started from third position, and I said I had to go behind him and he pulled me in a very good sprint.”

At the finish, Sagan was quick to thank his teammates, who were instrumental in keeping him safe in the early stages of the race. “I am very happy for today. I have to thank my teammates as they did a lot of hard work today. From the start they were a bit on the back foot but they came again. We played a bit with the group, and it was good from them. I had a hard time yesterday I am very happy for today. It was very hard and I want to thank my teammates. Every race is different and today was my day.”

Sagan continued, describing the final 30km of the race. “In the final it was a hard race with the strong wind and we went full gas. In the final we attacked with Fabian in the last cobblestone climb, Kemmelberg, and made the breakaway. Then I think the fans also saw the breakaway – we worked well together from the start. In the sprint the speed was very slow as we spent a lot of time on the front of the group. Today I felt very, very good and the victory is here and for that I’m very happy.”

After taking his first win of the season, Sagan was philosophical about the coming races. “For sure what is very important is I have good condition. Friday was a different race and today was much better for me. I am very happy and I am on good form for Flanders and Roubaix. E3 was a different race and you can see the end of the race was different. Everybody knows I was tired – I worked a lot on Friday. In life there are more important things than placings – I’m riding for passion, not for ambition.” 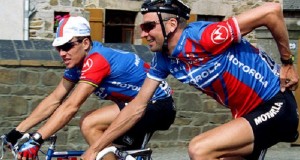 Sean Yates tells the BBC that Lance Armstrong was hunted down...