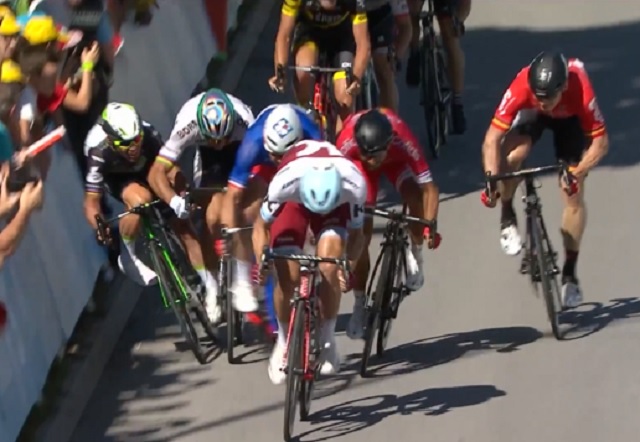 Peter Sagan (Bora-hansgrohe) has been disqualified from the Tour de France today for what the commissaires panel described as having ‘endangered seriously several other riders including Mark Cavendish in the final meters of the sprint.’

The disqualification was in relation to a crash in the closing metres where Cavendish was riding up the inside of Sagan against the barriers in the sprint to the line.

Sagan then stuck his right elbow out towards the Manxman with Cavendish crashing to the ground. John Degenkolb (Trek-Segafredo) and Ben Swift (UAE Emirates) also crashed in the incident.

After the end of the stage, Sagan made his way towards the Dimension Data bus to apologise to Cavendish for causing the crash.

The news of the disqualification was announced over an hour after the end of the stage, after Sagan had initially been given a 30-second penalty and docked points in the green jersey competition. However, after further analysis of footage of the crash, the commissaires panel decided to disqualify Sagan.

“We decided to disqualify Peter Sagan from the 2017 Tour de France because he endangered seriously several other riders including Mark Cavendish in the final meters of the sprint which happened in Vittel”, president commissaire Philippe Mariën stated. “We apply article 12.104 of the UCI regulations which allow us to disqualify a rider.”

Mark Cavendish spoke about the extent of his injuries afterwards and also about the crash itself.

“I don’t know, I gotta get it looked at,” Cavendish said. “I have to speak with Peter. Injury-wise I’m going to go and get it checked out. I will definitely need stitches in this finger, it’s bleeding a lot. With the shoulder, it might be something to do with a previous injury, it’s sat backwards so I’m not sure if I’ve done something to the ligament. I’m not a doctor but from the feelings I’m not optimistic.”

The stage meanwhile was won by Arnaud Démare. The FDJ rider finished ahead of Sagan and Alexander Kristoff (Katusha) becoming the first Frenchman to win a bunch sprint of the Tour de France since Jimmy Casper in Strasbourg in 2006. Geraint Thomas came home safely to retain the yellow jersey. 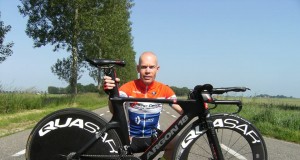