Pascal Ackermann (BORA – hansgrohe) took his third victory of the season at Eschborn-Frankfurt yesterday when he sprinted home ahead of John Degenkolb (Trek – Segafredo) and Alexander Kristoff (UAE-Team Emirates) at the end of 187.5 kilometres.

The 58th edition of the German classic was changed somewhat this year. In addition to the Feldberg, the race took the riders over the Mammolshainer Stich four times, as well as the Ruppertshainer climb twice, and the Billtalhöhe once. With a combined 3,222 metres of climbing in the legs, the riders then approached the new 6.5 km-long Main circuit, which they had to complete two and a half times.

Right from the start, a group of seven riders escaped from the main field and carved out a gap of several minutes. During the course of the race, the peloton kept the leaders within a reasonable distance, and the gap hovered around 4 minutes.

In the final kilometres, the BORA – hansgrohe riders worked hard to bring Pascal Ackermann into an optimal position. Davide Cimolai (Israel Cycling Academy) was the first to launch his sprint but Ackermann tied it perfectly to take the win ahead of Degenkolb and Kristoff with Cimolai in third. With that victory, he became the first rider in twenty years to win the race as the reigning German champion.

Pascal Ackermann – “We came here to Frankfurt with a goal, and that was to take the win. It’s a great feeling to have finished it off. The guys rode at the front of the peloton the whole day, and in the end it was nice to be able to win. I was admittedly under quite some pressure today. We are a German team competing at a German race, and of course we wanted to do everything we could to win. The team is in top form, and so we’re looking forward to the upcoming Giro d’Italia.” 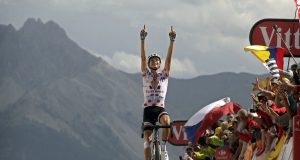