Team Sunweb have announced the riders that will be racing at this year’s Vuelta a España with Nicolas Roche included in the line-up. The team are set to focus on a good GC result and stage success.

Team Sunweb coach Luke Roberts discussed the race: “The race starts with a 13.4 kilometre team time trial in Torrevieja and we will then race over some familiar roads from our training camps on the Costa Blanca, heading north to the first high mountain stage in Andorra, followed by a 36 kilometre individual time trial in Pau. The race then moves through the Basque Country and Asturias before the final week in central Spain and the finish in Madrid.

“With two time trials and eight hilltop finishes, including the brutal Alto de Los Machucos and Alto de La Cubilla to sort the GC, there looks to be five or six opportunities for sprinters and the rest of the stages will likely go to breakaways or a decimated bunch.

“Our main goal will be to target a good GC result with Wilco. We bring strong support with Nicholas, Australians Robert and Michael, and also all-round talent Martijn, who we are really happy to see on our line-up after a really difficult period recovering from his Paris-Nice crash. Max will be taking aim at stage success in the flat sprints, backed up by Grand Tour debutant Casper and our road captain Nikias.” 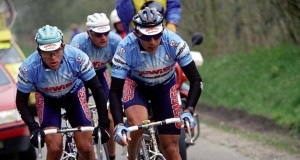 The most unbelievable Fleche Wallonne ever (VIDEO)