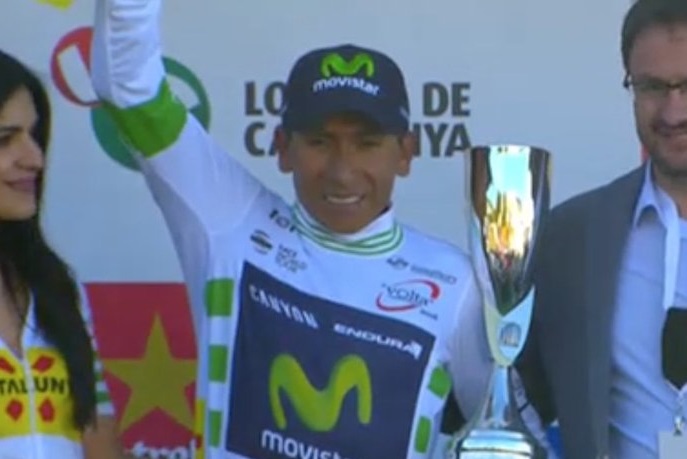 Nairo Quintana emerged strongest of the GC contenders on today’s stage of the Volta a Catalunya to take over the race lead from Dan Martin.

Today’s 172-kilometre stage was the Queen stage of the race and included the climbs of Port de Canto, Alt de Enviny before finishing with the climb to the summit at Port Ainé.

Going into the stage, Martin held a slender lead of 6″ over Alberto Contador (Tinkoff) and a further 2″ ahead of Romain Bardet (AG2R La Mondiale).

Erviti went clear alone following the penultimate climb and was chased by De Gendt and Weening while back in the peloton, Wout Poels (Team Sky) went clear.

Erviti was still clear as they started the final 18-kilometre climb to Port Ainé which had an average gradient of 6.8% and a maximum of 12%. However Weening made his way back to the Spaniard and would then go clear alone.

Poels was brought back with seven kilometres left whilst up front Weening was fighting to hold on to his lead from de Gendt.

With 3 kilometres left, Tejay van Garderen (BMC Racing) attacked the bunch whilst de Gendt made it up to Weening and dropped the Dutchman.

As Van Garderen was caught by the main group of favourites, his team-mate Richie Porte attacked. Alberto Contador and Nairo Quintana (Movistar) went with him as race leader Martin struggled.

De Gendt managed to hang on to win by 1’08” from Quintana who dropped Contador. Porte pipped Contador for third as Martin came in a further 22″ down.

Quintana gained enough time to move into the lead. The Colombian leads Contador by 8″, Porte by 17″ with Dan Martin now in fourth, 24″ behind.

The race continues tomorrow with a 187-kilometre stage from Rialp to Valls with two Category two climbs along the route including Alt de Lilla with just eight kilometres remaining. 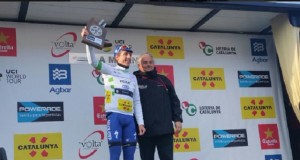 Dan Martin sprints to victory at Volta a Catalunya and moves...