Multiple Grand Tour and classics winner Felice Gimondi passed away on Friday. The 76-year-old was swimming off the coast of Sicily where he was on holidays, when he suffered a heart attack.

The man from Sedrina, near Bergamo, enjoyed a remarkable career, winning all three Grand Tours in addition to numerous big one-day races. When he won the Vuelta a España in 1968, he became just the second cyclist ever after Jacques Anquetil to have won all three Grand Tours, having won the Tour de France in 1965 and the Giro d’Italia three times (1967, 1969 and 1976). To-date, only seven riders have achieved this feat.

As an amateur rider, Gimondi won the Tour de l’Avenir in 1964 before going on to turn professional. He rode for Salvarini in his debut pro season and he was a last-minute addition to their Tour de France team in 1965 after the withdrawal of a number of other riders. Earlier that season, he had helped Gianni Motta secure victory at the Giro d’Italia and it was expcted that he would ride in support of his team-mate. However, it was Gimondi who proved strongest and he went on to win the race ahead of Raymond Poulidor and Motta at the age of just 22.

Other wins on his palmares included Volta a Catalunya (1972), Tour de Romandie (1969), Giro del Lazio (1967) and Trofeo Baracchi (1968 and 1973). What makes his career all the more remarkable is that his time in the professional peloton coincided with that of Eddy Merckx. 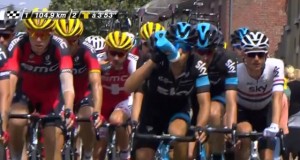 Highlights of Stage 4 of the Tour de France