The Movistar Team has issued the following press release to outline the latest news about the health status of its rider Adriano Malori.

Italy’s Adriano Malori was moved on Monday to a specialised clinic in the city of Buenos Aires, with the aim of having more precise medical checks done on him, with techniques and instruments not available at the hospital in San Luis he was admitted to after his accident.

This is the usual protocol in such injuries, consequence of a cranioencephalic trauma. He’s accompanied at all times by team doctor Jesús Hoyos, who coordinates, together with the services of the hospital itself, all attention received by the rider.

After that information, Movistar Team feels obligated to issue the following considerations, which clarifies some information published by different media during the last few days:

1.- The riders who closely witnessed the accident confirmed the sequence of events that led to Adriano’s injuries: Malori hit a pothole, which threw him off balance and made him crash. That was, without any sort of doubt, the reason for his accident.

2.- Moments after the accident and following his admission to the hospital, joined by the team’s medical staff, the rider was induced to a status of ‘coma’, which stands for a sort of induced sedation, allowing the patient’s injuries to heal in a controlled way. The ‘coma’ was never a direct consequence of the trauma.

3.- The Movistar Team has always informed about the condition of riders, like Adriano Malori, who crashed during a competition or while training. Our information is always offered with an aim for transparency and issued periodically, but always taking into account that, sometimes, respect to the involved rider’s intimity and to his family and friends is much due.

In no way has the Movistar Team tried to hide the seriousness of the rider’s injuries. There cannot be any confusion about the extreme rigurosity on our communications, which are always based on precise, reliable medical reports. 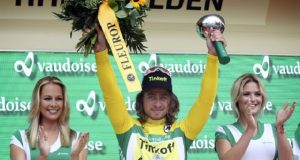